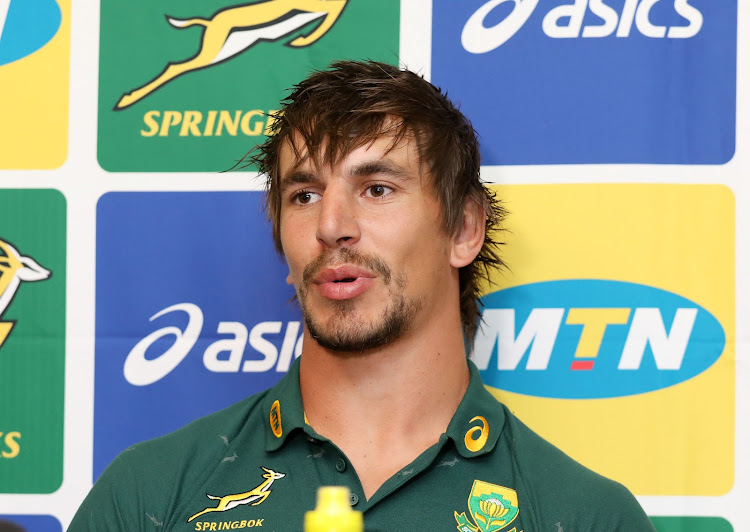 Springbok captain Eben Etzebeth says the team's end of year tour will determine the success of their season.

It is a season in which they have improved yielding five wins‚ two defeats and two draws.

The straight-talking lock was unambiguous about the team's objectives on Thursday.

“We are looking for four wins‚” he said about the Tests against Ireland‚ France‚ Italy and Wales.

Last year the Springboks suffered a first ever home defeat against Ireland before winning the series two one.

Etzebeth believes the Springboks are much better prepared for the Irish.

"The guys know each other better. We are a more gelled unit this time.”

Since Allister Coetzee took over the coaching reins the Boks have recorded only one away victory (against Argentina this year). He is quite aware of the fact.

“We need to start winning away as a group. This time we play them at the start of their season. Ireland will be difficult‚” he acknowledged.

Apart from being more familiar with each other the Springboks are physically in much better shape than they were at the corresponding period a year ago.

Confidence then was low and muscles were aching.

“I am so pleased with the conditioning‚” said Coetzee.

“Last year at the same time only two players could pass a fitness test. This time the whole squad is in good condition and in peak shape‚” said the coach.

Injury‚ however‚ remains a constant threat and he was specifically asked about the possible involvement of backrower Duane Vermeulen should the Boks suffer further orthopaedic upheaval.

Vermeulen has himself only just returned to the field for his club Toulon after an injury lay-off.

“It is not just going to be easy to come from club rugby and step in seamlessly.

"Obviously we are talking about Test match rugby and our players in training are covering between five and eight kilometres per training session.

"Well over 100m per minute. I don't know how rugby ready he is. Our medical team is on top of that.”

As an example of his squad's power and aerobic ability Coetzee described his forwards as 'mobile' and 'physical' Etzebeth who has just returned from an ankle injury‚ embodies those characteristics when at full tilt.

“I'm feeling much better. I did some running. I will be joining the team on Saturday for warm-up and will be taking part in about 50 percent of the training session.

"When we get to Ireland on Monday maybe I will be training fully with the team.”

Coetzee reported a clean bill of health for the rest of the squad.

“Andries Coetzee is back. He had a bit of tonsillitis. Coenie (Oosthuizen) is raring to go. He is participating in contact‚ everything.”

Inevitably the Bok coach on an end of year tour‚ following the disappointment for some in the Currie Cup final‚ has to restore confidence in some areas. Asked if he was concerned about Sharks utilility back Curwin Bosch's tackling‚ Coetzee counter punched.

“No‚ no‚ no. It really isn't a concern for me. Every player has shortcomings.

"A lot of players in the final missed tackles. I don't say every players is bullet proof and there are things they need to work on.

"I don't want to come up for Curwin but show me flyhalves that take the skin off the opposition.

“He's a young guy‚ he's 20 years old. He will develop and he will get confidence. When he kicks the ball there is something special about him.

"Instead of just focusing on the weakness I would like want him to concentrate on his strengths.”

Rugby World Cup 2019 will only have to wait 24 hours for the biggest game of the Pool stage after Thursday’s draw revealed that defending champions ...
Sport
4 years ago

Springboks to take All Blacks in World Cup opener

World champions New Zealand will kick off their title defence against South Africa at the 2019 Rugby World Cup, organisers said on Thursday, the only ...
Sport
4 years ago

South Africans have been walking with a spring in their step since World Rugby recommended the country as the host of the 2023 Rugby World‚ but not ...
Sport
4 years ago