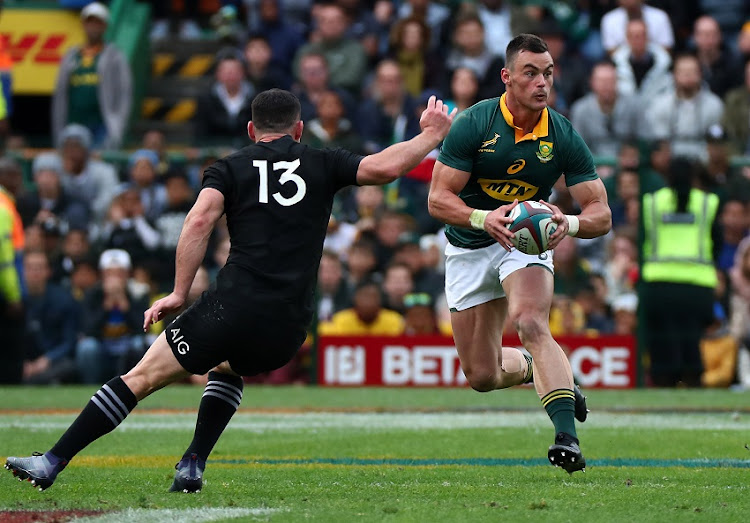 While Ireland will take a leap into the unknown the Springboks have pinned their midfield hopes on a centre pairing that last joined forces in 2015.

Much of the Springboks fortunes against Ireland at the Aviva Stadium on Saturday will rest on the ability of the back in favour Damian de Allende and Jesse Kriel to gel in midfield.

They struck up a decent enough partnership at the last World Cup after captain Jean de Villiers again had to yield to injury.

This time the absence of Jan Serfontein has provided the opportunity for the pair to reunite.

Neither has sizzling form but coach Allister Coetzee hopes they can spark as a combination.

“Damian is a really special player,” said Kriel about his new partner. “He is a good communicator and helps on the defence. He’s a really good organiser and is special with ball in hand. He has the ability to beat the guy in front of him and forces defenders on the outside into unwanted actions which creates space.

“He’s a really exciting player. I’m glad he is back in the mix. He deserves that opportunity.”

The Boks have gone about their business with a greater desire to hang onto the ball this season but at an icy Aviva Stadium they are unlikely to get too adventurous on Saturday. “Conditions play a big part but our coaches want us to be an all round team. Being able to adapt to anything that is thrown at us. That is our mindset. Things don’t always go according to how you want it to go but that is why it is a test of character,” said Kriel.

They will certainly be tested in that area. Ireland’s liberal use of residency qualification for foreign born players has paved the way for former Chiefs midfielder Bundee Aki to make his debut.

Aki’s straight and angular running is done with equal potency and De Allende and Kriel may have their hands full in trying to contain him.

“Bundee Aki is a great player. Both centres are big, physical guys I think we can expect a good matchup in midfeld. It is something we are looking forward to. It is going to be a big test match. I think it’s about the team that works hardest, in all areas, the unseen efforts will win the game,” predicted Kriel.

Ireland may be a little distracted by Aki’s inclusion. He is the ninth player to be selected under the Irish residency ruling that permits foreign born players passage into the national team.

Andy Ward, Richardt Strauss, CJ Stander and Robbie Diack are all players who have qualified to play for Ireland under that ruling but there is considerable debate here about the need to source players born elsewhere.

“Bundee’s slotted in really well but I don’t think it’s any different for Darren Sweetnam or anyone else,” said coach Joe Schmidt.

“Darren’s been in one or two other camps, Bundee came in for just the single day we had earlier in the season. So people have dipped their toe in and now they’ve got to plunge in and it’s a pretty deep pool first up.

“One of the things that is good about Bundee and a few of the other players that have come in is they are quite instinctive players. Jacob Stockdale, his instinct is to carry and to be very strong and try to take the outside break, and if that’s what he sees that’s what we want to back himself doing. It’s as simple as that, really.”

Given all the pre game talk they are likely to be the centre of attention.