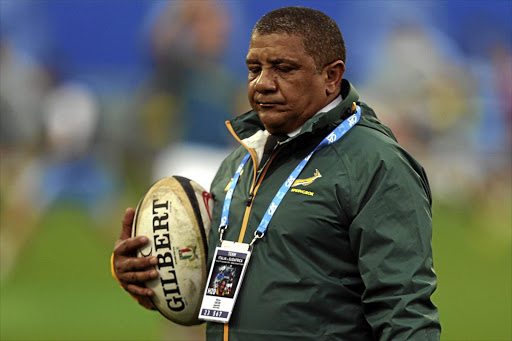 SA Rugby seem to be unable to buy Allister Coetzee out of the remainder of his contract that expires in 2019.File photo
Image: GETTY IMAGES

Allister Coetzee’s remaining time as Springbok coach can be counted in weeks‚ not months‚ after the Boks slumped to a record 38-3 loss against Ireland in Dublin on Saturday.

Inside sources revealed that SA Rugby president Mark Alexander had a heated exchange with Coetzee in the immediate aftermath of the Dublin debacle‚ reminiscent of scenes after the Boks lost to Italy in Florence in 2016.

SA Rugby’s executive committee is set to meet in early December where Coetzee’s contract will be terminated following two seasons of disastrous results.

It is understood that some thought had been given to recalling Coetzee immediately following the latest embarrassment‚ but that plan has been shelved in favour of a formal dismissal process.

The Boks still have Tests against France‚ Italy and Wales to come on the current tour and could suffer further humiliation‚ but changing coaches mid-tour would serve little purpose.

Under Coetzee the Boks have won only nine of 22 Tests and racked up all sorts of record losses and unwanted firsts.

In September they slumped to a record 57-0 defeat against the All Blacks in Albany‚ which has now been compounded by this latest setback against Ireland.

While Coetzee has to shoulder the blame because he is the ultimate decision-maker‚ the players were culpable too at the weekend.

Seldom have the Boks delivered such a passive‚ tepid display. What they lacked in skill and tactical nous‚ they couldn’t even make up in aggression and physicality.

Tactically‚ technically and emotionally‚ the Boks offered nothing. They looked like a team going through the motions and the players’ performances bordered on mutinous.

After the match Coetzee offered no reasons for the defeat and spoke half-heartedly about ‘fighting back’‚ which of course is just empty rhetoric.

After losing 25-24 against the All Blacks at Newlands‚ you would have sworn SA won the match given some of the comments in days and weeks after.

Considering the All Blacks had a tough travel schedule and had already won the Rugby Championship there was little glory in that defeat.

They also lost flyhalf Beauden Barrett and wing Nehe Milner-Skudder to injury before halftime‚ yet Coetzee held up the losing performance as some sort of achievement.

“This is an important tour for us and our standard of play has to be at the level of our last match against New Zealand in Cape Town‚” Coetzee said in the lead up to the Ireland match.

That’s how far the Boks have slumped.

The coach holds up defeats against the All Blacks as a measurement of success.

Mercifully the end is near.

Key areas the Boks need to brush up on

The Springboks fell short in several key areas in their record 38-3 defeat to Ireland at the Aviva Stadium on Saturday.
Sport
4 years ago

Beleaguered Bok coach Allister Coetzee is having second thoughts about his selection policy that backs continuity to help avoid another end of season ...
Sport
4 years ago

Rugby will be tarnished forever should South Africa fail to secure hosting rights for the 2023 Rugby World Cup (RWC) due to last minute horse trading.
Sport
4 years ago