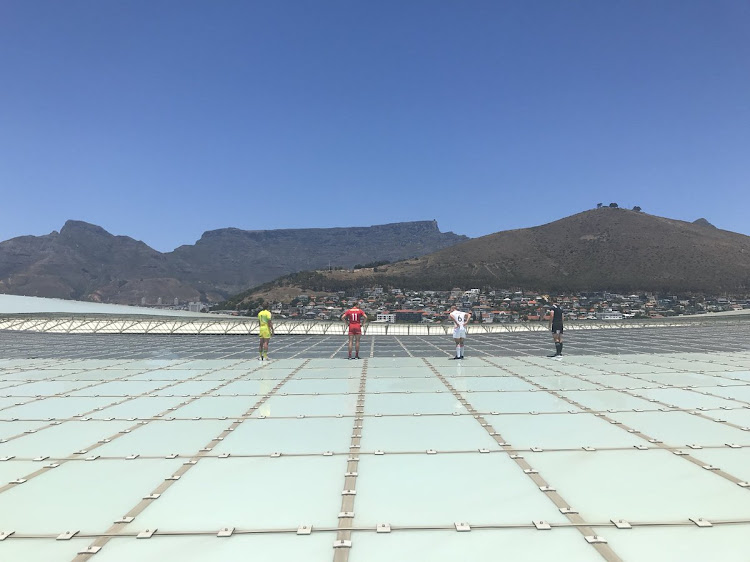 Some of the captains of the teams who are going to participate in the World Sevens Cape Town leg in South Africa posing for photo on top of the Cape Town Stadium, which is near world heritage site the Table Mountain.
Image: World Sevens Rugby via Twitter

Blitzboks skipper Philip Snyman was one of 16 captains lined up on the Cape Town Stadium’s roof for a photo shoot on Tuesday‚ and on Sunday he and his team hope to raise it with another home World Series victory.

The Blitzboks‚ current series champions and hot favourites on home soil‚ will go into this weekend’s second leg of the 2017/18 HSBC World Series high on confidence and form after winning in Dubai last weekend.

New Zealand showed a return to form with their first final appearance since the 2015/16 season in Dubai last week‚ while Fiji and England also caught the eye.

Those three teams will be better after removing the off-season rust in the desert heat while Australia‚ Kenya and Scotland will also be dangerous.

With the tournament sold out for months already‚ the Blitzboks can expect massive support from the 110,000 crowd over the two days.

As defending champions and winners in Dubai‚ SA comes into the tournament under the pressure to please their home crowd.

But it’s something they are embracing rather than shying away from.

They are drawn in Pool A alongside Kenya‚ Russia and France.

The Blitzboks have met Russia 18 times and won all 18 clashes while in 48 meetings with France the home team have lost only six.

Against Kenya‚ SA’s record is also impressive with 44 wins in 50 meetings against only five losses and a draw.

One of those wins was a 48-5 victory in Dubai last week.

“It will do us so much good coming on the back of a win‚ and it has set us up well for the season.

“We only get to play at home once a year so our goal is obviously to give the fans what they want – the trophy.”

Snyman was equally delighted to be in his home city: "We have a tough pool in our home tournament against Kenya‚ Russia and France and it's going to be physical but I think we are going to be ready.

"It was a great moment for us last season winning in Cape Town‚" said Mitchell.

"It was amazing beating South Africa in the final and a great moment for the guys‚ but it's not playing on our minds too much this week.

"We enjoyed ourselves last year and will be looking to do the same again."

The Blitzboks were back to work on Monday having already put victory at the 2017/18 Wold Sevens Series opener in Dubai behind them‚ as they began ...
Sport
3 years ago

WATCH | Defiant Coetzee unfazed by the mounting calls for his head

Defiant Springboks coach Allister Coetzee has come out with guns blazing and is unfazed by the mounting calls for his head.
Sport
3 years ago

Springboks stand-in captain Eben Etzebeth has fired a salvo at former players and coaches who have been critical of the team on their tour of Europe.
Sport
3 years ago