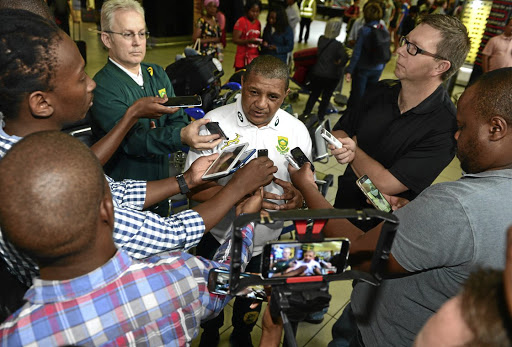 QUESTIONS TO ANSWERSpringbok coach Allister Coetzee arrives with his players at OR Tambo International Airport on Monday after their Europe tour
Image: Gallo Images

Etzebeth fired a salvo at his team's critics, most notably commentators Nick Mallett and Naas Botha, while Coetzee insisted he was unfazed by mounting calls for his head.

Just minutes after landing at OR Tambo International Airport, Coetzee threw down the gauntlet to his employers and said it was business as usual as far as he was concerned.

"I am going through the normal procedures of a review," Coetzee said. "I will never predict the future because I can't.

"But I will give my plan to SA Rugby and they can determine whether there is growth and if we are heading in the right direction."

Coetzee - who has overseen seven wins, two draws and four losses this season - insisted the Boks had improved gradually this year and he was happy with what they had achieved.

Springboks stand-in captain Eben Etzebeth has fired a salvo at former players and coaches who have been critical of the team on their tour of Europe.
Sport
4 years ago

"I firmly believe we are heading in the right direction," he said. "This team has improved from last year. It is fitter, stronger and lasts longer. This team has had minimal injuries this season, which shows the hard work done by the medical and conditioning staff.

"This team can adapt to situations on the field and one must not forget that this year we lost Warren Whiteley as our captain and Eben Etzebeth had to stand in.

"There are leaders who have developed around Eben, like Siya Kolisi, Elton Jantjies, Francois Louw and from that perspective we are also better off."

Etzebeth did not hold back when asked about the criticism Mallett and Botha had fired his way. "They don't always know what they are talking about," said the lock.

Etzebeth became the second senior Springbok player after Kolisi to openly support Coetzee, saying he should continue as coach.

"I have no say in that, but if the decision was up to me, I would keep him as a Springbok coach," said Etzebeth.

"In the four games [against Wales, Italy, France and Ireland], we could have won [them all] but we will be looking to do better next year.

"We are the guys who go into the field and not the coaches."

“Are you throwing in the towel?” Springbok coach Allister Coetzee was asked as he headed to a door inside the cavernous Principality Stadium stadium ...
Sport
4 years ago

Allister may be proud ...

... but it could be the Springbok coach's last match in charge
Sport
4 years ago