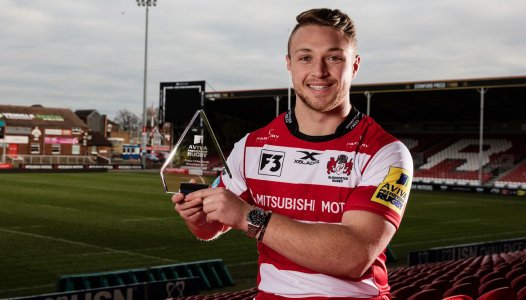 Former Lions looseforward Ruan Ackermann has been named as England’s Aviva Premiership Player of the Month for November.

Playing for Gloucester‚ which is coached by Ruan’s father Johan, Ackermann will certainly be on England coach Eddie Jones’ radar as a possible national player by 2020.

Ackermann‚ 21‚ is uncapped by the Springboks and never played for the Junior Springboks – SA’s designated second team – which clears his path to play Test rugby for another nation.

Gloucester are currently fourth in the standings‚ due in no small part to Ackermann’s bruising play.

Rugby World Cup 2003 winner Will Greenwood is in the perfect position to assess Ackermann’s qualities having coached him while he played for the Barbarians against the All Blacks.

“The guy is a total team player‚ with an immense work ethic.

“I found Ruan epically fit‚ a player who is in unbelievable shape. He is so dynamic‚ tough physically and mentally.”

He's been on fire 🔥 since arriving that early morning at Heathrow!

Ackermann said last month he would consider playing for England if the opportunity arose.

"I'm still young so I can always go back (to South Africa)‚" Ackermann told KweseESPN when asked about his international future.

“But I can give myself a fair shot here and you never know‚ hopefully it goes well and you can create yourself an option of playing for England as well.

“If it doesn't come and the England door opens up‚ I mean‚ I'm still young and England is a proud nation‚ so why not?”

Greenwood believes Ackermann has made a massive impact at Gloucester Rugby‚ adding: “The reality is every successful team needs a Ruan‚ the total team player‚ who has immense work ethic‚ awareness of space and he will always make the important tackles.”

A panel of experts judged Ackermann as the player who made the biggest impact in the League over the month.

He was involved in a four-way battle for the gong‚ eventually beating Worcester Warriors pair Josh Adams and Francois Hougaard and Olly Woodburn of Exeter Chiefs to the title.

The last thing that SA Rugby boss Jurie Roux wants to do is enter an evaluation process to host a World Rugby event in South Africa after last ...
Sport
3 years ago

Blitzboks skipper Philip Snyman was one of 16 captains lined up on the Cape Town Stadium’s roof for a photo shoot on Tuesday‚ and on Sunday he and ...
Sport
3 years ago