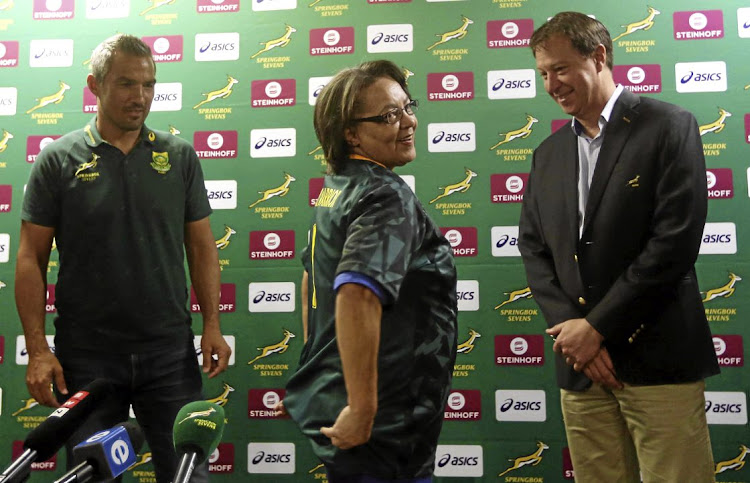 Cape Town mayor Patricia de Lille receives a 'water warrior' jersey from SA Rugby CEO Jurie Roux, right, and Blitzboks coach Neil Powell. The City has measures in place to save water during the local leg of the World Sevens Series at Cape Town Stadium over the weekend from December 9-10.
Image: Esa Alexander

Blitzbok coach Neil Powell has picked the same 12 players that won in Dubai last week for this weekend’s second leg of the HSBC World Sevens Series in Cape Town.

It was an easy decision considering there were no injuries‚ but he has changed the 13th man‚ the standby reserve.

“All the players would love to play in their only home tournament on the circuit‚ so the result in Dubai made it easy for me to pick the team‚” said Powell.

“Everyone returned fit from that tournament and will have the added motivation of playing in front of a very supportive home crowd.

“The only change to our squad is the official reserve – we have included Siviwe Soyizwapi in the place of Marco Labuschagne – which was part of our planning all along.

“Siviwe travelled to Dubai as captain of the SA Rugby Sevens Academy squad‚ which gave him the opportunity to get some playing time.

"He performed very well there and he will slot in easily‚ should one of our players pick up and injury which rules him out of the tournament.”

It was a result that left coach Simon Amor satisfied for a first outing of the season‚ which ended in semi-final defeat against New Zealand.

“As a first tournament for us this season I’m really proud of the continuous effort and the attitude the boys displayed in every single game‚" said Amor.

“We didn’t quite get our decision making right in terms of our attack – particularly in the New Zealand game where we had some chances but didn’t quite take those opportunities – but those are the margins at the top level now.

"If we can learn from that and keep on growing then we’ll be in a good place to really kick on for the rest of the season."

Powell and the Blitzboks have displayed an air of calm in throughout the much-hyped build-up to their home event‚ but there is no doubt they are under pressure to perform as the hosts and also the defending World Series champions.

“We needed to fine-tune a couple of things that we did not execute well in Dubai‚” said Powell.

“This we did that and still have two training sessions left this week‚ so we have to ensure the players are mentally ready for the big event.”

South Africa will play Russia‚ France and Kenya in Pool A of the competition on Saturday.

The Springbok Sevens team for the HSBC Cape Town Sevens:

Blitzboks skipper Philip Snyman was one of 16 captains lined up on Cape Town Stadium's roof for a photoshoot on Tuesday, and on Sunday he and his ...
Sport
4 years ago

Blitzboks skipper Philip Snyman was one of 16 captains lined up on the Cape Town Stadium’s roof for a photo shoot on Tuesday‚ and on Sunday he and ...
Sport
4 years ago

The Blitzboks were back to work on Monday having already put victory at the 2017/18 Wold Sevens Series opener in Dubai behind them‚ as they began ...
Sport
4 years ago