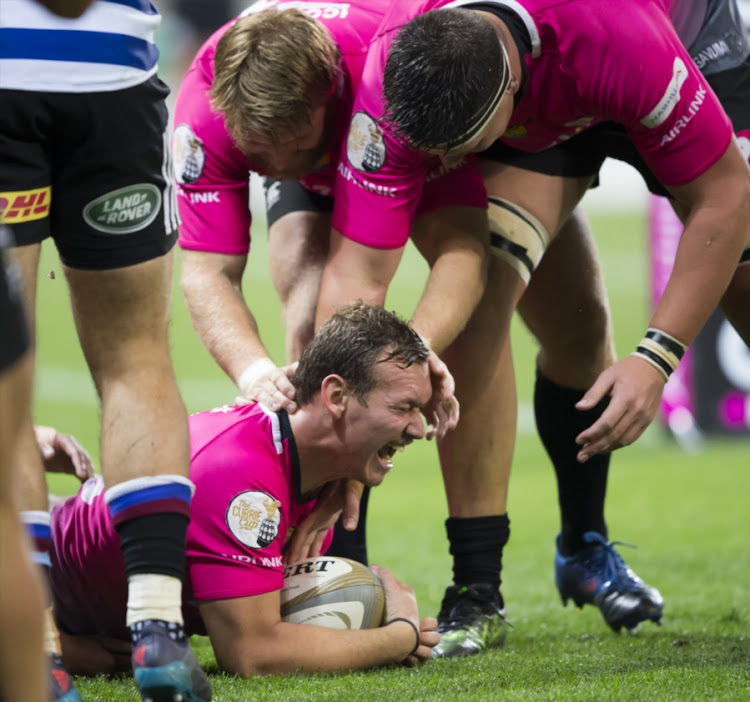 Kobus Marais of the Steval Pumas celebrates with his teammates after scoring a try during a Currie Cup match against DHL Western Province at Mbombela Stadium on September 15, 2017 in Nelspruit, South Africa.
Image: Dirk Kotze/Gallo Images

Earlier this year PRO14 chairman Martin Anayi said that the tournament’s aim was to continue growing and on Friday two new possible venues – Nelspruit and Kimberley – were added to the pot.

SA Rugby’s general council confirmed that the Mpumalanga and Griqualand West Rugby Unions had been granted ‘preferred candidate’ status if openings in inter-continental competitions open up. Which means they are the seventh and eighth franchises in SA.

With Super Rugby downscaling‚ it’s unlikely opportunities will exist in the southern hemisphere‚ so it’s to the north‚ where the Pumas and Griquas will look.

Their first step into the northern hemisphere could be through the Anglo-Welsh Cup‚ a cross-border knockout competition featuring sides from England and Wales‚ before a possible move into an expanded PRO14.

Discussions have already taken place with various entities about potentially fielding teams in other international competitions. Any announcements in that regard will only be made on the completion of contractual negotiations.

PRO14 is still very much the poor cousin to England’s Premiership and France’s Top 14 in terms of TV revenue. PRO14 is worth R225m annually while the Premiership rights sold for R870m. Top 14 in France was worth a whopping R1.56bn.

But that is why they want to expand and why the opportunity is now there for Griquas and the Pumas to enter the big leagues via the Anglo-Welsh competition.

Anayi stated earlier this year that PRO14 was a tournament driven by expansion.

"The French numbers are extraordinary‚ I find it difficult to see how we could get there in a short space of time‚" said Anayi.

"The English numbers are probably a lot more manageable target. It won't be this cycle but as we develop that South African market more‚ it is very close behind the English and French markets from a value point of view.

"Because we're multi-territory‚ we won't match the English numbers but the aggregate will get closer. But they're going to kick on as well."

The appearance of the Pumas and Griquas in any new competitions would be dependent on their agreement to licensing terms and conditions‚ said Jurie Roux‚ SA Rugby CEO.

“This is an important first step to further expanding the international reach of South African rugby and gives us time to have them properly prepared should future opportunities become available‚” he said.

“There are discussions taking place but we are some way from confirming any new opportunities. That process is likely to continue well into 2018 before we have any finality.”

Blitzbok coach Neil Powell has picked the same 12 players that won in Dubai last week for this weekend’s second leg of the HSBC World Sevens Series ...
Sport
3 years ago

Former Lions looseforward Ruan Ackermann has been named as England’s Aviva Premiership Player of the Month for November.
Sport
3 years ago

The last thing that SA Rugby boss Jurie Roux wants to do is enter an evaluation process to host a World Rugby event in South Africa after last ...
Sport
3 years ago