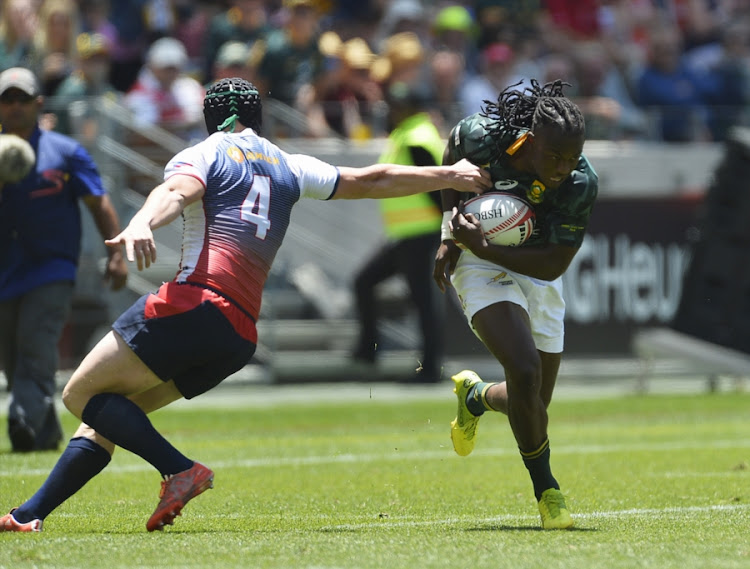 Seabelo Senatla does most things rugby related in a hurry, and on day one at the Cape Town Sevens the Blitzbok flyer sped into the record books as the home team booked a quarterfinal against Fiji.

When Senatla touched down late in SA’s 31-5 win over France, for his fourth try of the day in the home team’s second match of the day, he became the fastest man to 200 tries in World Sevens Series history.

Senatla, 24, reached the milestone in his 35th tournament and in his 175th match. England’s Dan Norton, who took 51 tournaments to go to his double century, held the previous record for the fastest to 200 tries. Norton is the leading all time try-scorer with 272.

In the process Senatla became the first South African to reach the mark and only the fifth player in history after Norton, Kenya’s Collins Injera (246), Argentina’ Santiago Gomez Cora (230) and England’s Ben Gollings (220) to notch up his 200th touchdown.

Going into the tournament Senatla had 196 tries and was quickly up and running with a hattrick against Russia in the Blitzboks’ first match, which ended in a 40-5 win.

A late Senatla try in the Blitzboks 26-5 win over Kenya in the final match of the programme, neatly bookended a day that belonged to flyer.

By beating Kenya the Blitzboks have now gone nine games of the new season, which started in Dubai last week, without defeat. They came into the season under pressure as reigning World Series champions and they have lived up to their status as the team to beat.

That status is going to be under severe pressure in the knockout stages after a Saturday of upsets set up some unexpected quarterfinals.

Fiji were runners-up to Canada in Pool D, setting up a dangerous last eight clash for the home team that has the potential to kill the party atmosphere at the spectacular Cape Town Stadium.

Fiji weren’t at their best but they have the ability to do the extraordinary, and the Blitzboks will be wary of the tough test to come on Sunday. Last week in Dubai, SA edged Fiji 12-7 in the semi-final.

On a day when the a gale force south-easter swept across Table Bay making playing conditions tricky, the winds of change also blew through sevens rugby. The USA hammered both New Zealand (22-0) and Australia (31-14) while Canada upset Fiji 22-14.

The other quarterfinals see England, who were also unbeaten on the day, facing New Zealand in a repeat of last week’s semi-final in Dubai, which the Kiwis won.

Seabelo Senatla became the fifth and fastest man in history to score 200 tries in the HSBC World Sevens Series when he scored during the Blitzboks’ ...
Sport
4 years ago

Seabelo Senatla scored a hattrick as the Blitzboks made a strong start to the Cape Town leg of the World Sevens Series by beating Russia 40-5.
Sport
4 years ago

After shaking off the rust in Dubai last week‚ all teams will be an optimum level for the second leg of the 2017-18 World Series in Cape Town ...
Sport
4 years ago

Blitzbok coach Neil Powell has picked the same 12 players that won in Dubai last week for this weekend’s second leg of the HSBC World Sevens Series ...
Sport
4 years ago