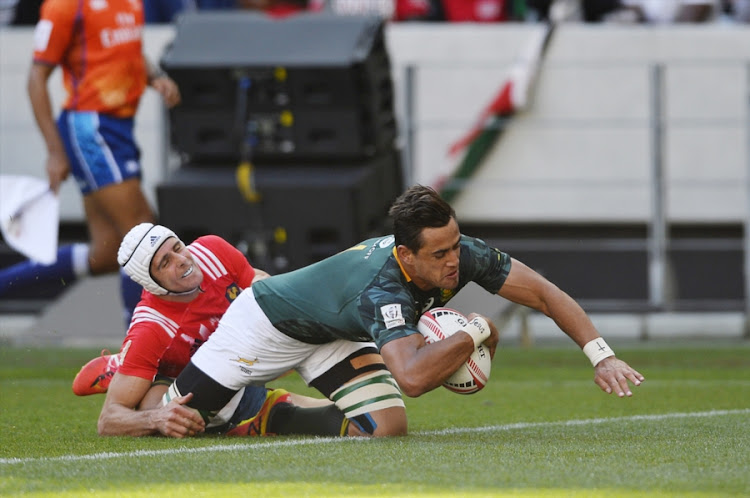 Springbok Sevens forward Chris Dry has suffered a huge blow after being ruled out for between six and nine months following a knee injury sustained in Cape Town on Sunday.

Dry‚ 29‚ suffered the setback during the Blitzboks’ quarterfinal of the Cape Town Sevens against Fiji and further medical tests revealed major ligament damage.

It puts the bruising player‚ who also represented the Cheetahs at looseforward during this year’s Currie Cup‚ at risk of missing the Sevens World Cup in San Francisco next July.

The injury has definitely ruled him out of the remainder of the World Series‚ which still has eight of the 10 legs to play.

“Chris will be operated on in Cape Town and will not be able to play for between six to nine months‚ which means he will miss the remainder of the series‚” Blitzbok team doctor Leigh Gordon said.

She also confirmed that Siviwe Soyizwapi‚ who replaced Dry for the last two matches in Cape Town on Sunday‚ suffered a knee injury.

“He (Soyizwapi) should be able to return to play in about six weeks’ time‚” Gordon said.

A number of Blitzboks picked up knocks in Cape Town‚ but according to Gordon‚ none of the injuries were too serious.

“Cecil Afrika tweaked his knee and Seabelo Senatla has a soft tissue injury to his shoulder‚ but both will‚ along with the rest of the squad‚ be fit to train once the squad reassembles in Stellenbosch early in January‚” Gordon said.

Dylan Sage‚ who missed the first two tournaments of the 2017-18 HSBC World Rugby Sevens Series because of a back injury‚ will join the squad in full training in January.

The next tournament in the series is the Sydney Sevens‚ to be played from January 26 to 28.

Stormers lock down key players until 2019

Although there is still some conjecture about the financial health of Western Province Rugby (WPR)‚ the professional arm of the sport‚ the union has ...
Sport
4 years ago

New Zealand are back as World Sevens Series contenders after three seasons without the title after winning the Cape Town Sevens on Sunday.
Sport
4 years ago

Cheetahs keep one eye on the play-offs

The Pro14 fortunes of the Cheetahs and the Southern Kings are accurately reflected by their log positions.
Sport
4 years ago