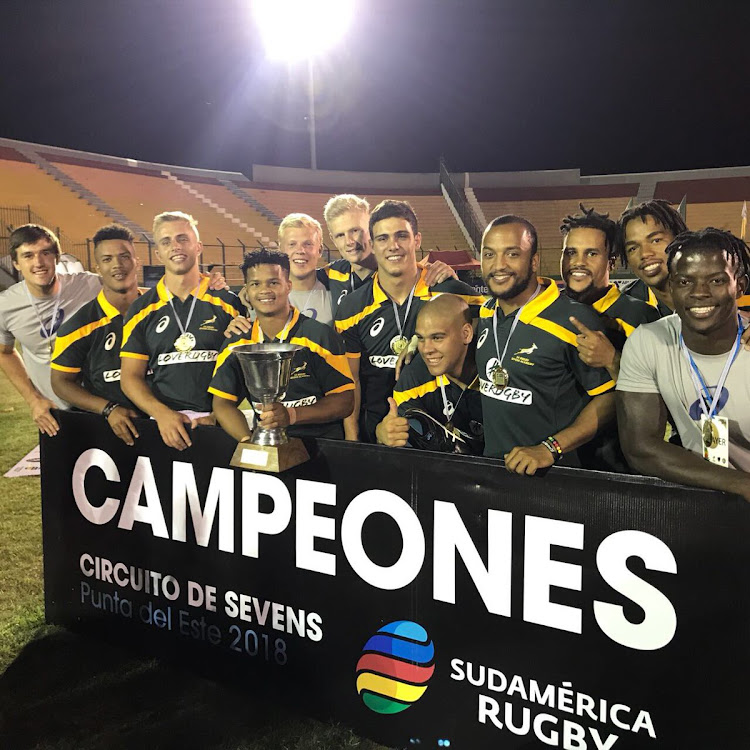 With battles on three fronts this season‚ the Blitzboks are going to need to draw on all their resources to be competitive in the World Series‚ the Commonwealth Games and the World Cup.

Which is why the recent success of the Sevens Academy team‚ the feeder to the Blitzboks‚ has been such a boost.

Blitzbok coach Neil Powell admitted late last year that he would have to fast-track some of the Academy players into the SA Sevens team to keep several senior players fresh for the one-off events at the Commonwealth Games and World Cup.

It’s a delicate juggling act that will come under scrutiny if the Blitzboks aren’t successful on at least one front.

Which is why he would be a pleased man that the Academy team enjoyed success in Punte de Este in Uruguay at the weekend.

The Academy team won the leg on the South American circuit beating Ireland‚ France and Chile to take the title.

"It was a great start to the year for us and the guys really had to dig deep for this one‚" SA Rugby Sevens Academy coach‚ Marius Schoeman said after they defeated Chile 21-5 in the final.

"We only had nine fit players left for the final match and given the fact that Chile beat us on day one‚ it was a remarkable effort by the squad.

"We did not let ourselves down in the final either."

Schoeman feels the tournament achieved a number of goals for the squad and for the SA Sevens programme in general.

"It is a big year for Springbok Sevens‚” Schoeman said.

"The defence of the HSBC World Rugby Sevens Series is underway (the Blitzboks are second on the standings after two events)‚ the Commonwealth Games and the Rugby Sevens World Cup‚ so the Academy's role of developing the next generation and to add depth will be pretty crucial.

"The guys were out of their comfort zones‚ playing far away from home on a different continent and still managed to deliver.

"We had two players who completed school only a couple of weeks ago (Angelo Davids and Muller du Plessis) and another trying sevens for the first time (Rhyno Smith) and this was the ideal learning curve."

The team now travel to Vina del Mar in Chile‚ where the second of the South American Sevens tournaments will take place this weekend.

The tournaments are part of the South American qualification process for the Rugby World Cup Sevens‚ to be played in San Francisco in July.

South Africa will face Brazil‚ Ireland and Paraguay in pool A of the Chile tournament.

The City of Johannesburg is now a disaster area.
News
4 years ago

The Blue Bulls Company has confirmed that the young Blue Bulls rugby loose forward Khwezi Mafu has been arrested on allegations of sexual assault.
Sport
4 years ago

The Springboks may have had a largely troubled year but there were other South African rugby coaches who covered themselves in glory this year.
Sport
4 years ago