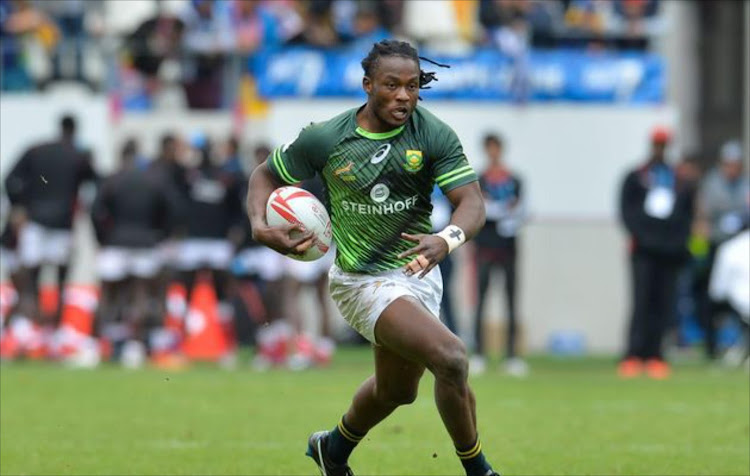 Seabelo Senatla on his way to scoring a try as the Blitzboks rugby team opened their 2016-17 World Sevens Series. Steinhoff International has withdrawn its sponsorship of the Blitzboks. File photo.
Image: Springboks Sevens via Twitter

The latest development means the Springbok Men’s and Women’s‚ and SA Rugby Sevens Academy teams will no longer carry the company’s logo. “We have been kept informed by Steinhoff of their thinking and they have confirmed their intention to withdraw from their sponsorship of Sevens rugby with immediate effect‚” said Jurie Roux‚ CEO of SA Rugby.

“It has been completed amicably and by agreement. We’d like to thank Steinhoff for their commitment and support over the past two seasons.”

Beleaguered global retailer Steinhoff International has pulled the plug on its sponsorship of the Varsity Cup rugby tournament following the collapse ...
Sport
4 years ago

Roux said that the process had already begun to identify an alternative partner. “We believe all our national teams have characteristics‚ values and a unique South African DNA that makes them highly attractive to commercial partners‚” said Roux.

“The Springbok Sevens team has added to that with consistently high standards of performance as the current holders of the HSBC World Rugby Sevens Series title and we believe they will be an attractive proposition for potential partners.”

During 2018‚ the Springbok Sevens team will defend their Commonwealth Games title on Australia’s Gold Coast between 13 and 15 April and then challenge for the Sevens Rugby World Cup title in San Francisco between 20 and 22 July.

The Springbok Women’s Sevens team will also contest both events.

The Blitzboks are next in action in the HSBC World Sevens Series in Sydney‚ Australia‚ on 26-28 January.