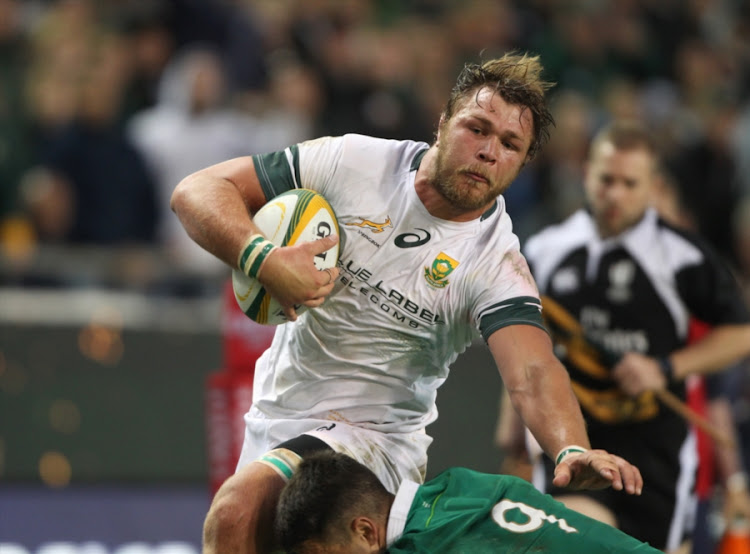 Springbok No 8 Duane Vermeulen’s probable return to South Africa in June has muddied the Springbok captaincy waters only a couple of weeks into the new year.

Vermeulen‚ 31‚ will return to SA at the end of the current French domestic season where he is playing for Toulon.

That’s according to respected French sporting publication L’Equipe‚ which says he will take up a dual contract with SA Rugby and Western Province.

Vermeulen did not immediately respond to queries about his future.

When the move happens Vermeulen will immediately come into the conversation as a potential Springbok captain.

With a new Springbok coaching structure set to be sorted out in the coming weeks‚ Vermeulen’s move would make even more sense as he has the pedigree and credentials to offer the team uncompromising and intelligent leadership to the 2019 World Cup.

The Springbok coaching situation is still in flux with SA Rugby currently following due process in its efforts to remove‚ or at the very least‚ redeploy‚ current coach Allister Coetzee.

SA Rugby director of rugby Rassie Erasmus‚ a known Vermeulen admirer‚ has already taken charge of the Springboks’ 2018 and 2019 planning and is set to act as interim coach in the likely event Coetzee is axed.

The beleaguered Coetzee‚ who has overseen only 11 wins in 25 Tests at the helm‚ appointed three Springbok captains in his first two seasons in charge.

Hooker Adriaan Strauss led the team through 2016 before retiring from international rugby. Last June Lions No 8 Warren Whiteley was named captain before injury ended his season two Tests into the job.

Stormers lock Eben Etzebeth assumed the role and led the team through the remainder of 2017 with flank Siya Kolisi as his vice captain.

Etzebeth was seen as a stopgap measure captain‚ and despite leading the team 11 times in 2017‚ he was regularly referred to as ‘interim captain’ in official statements.

So Vermeulen coming into the role to replace Etzebeth won’t necessarily lead to a public outcry.

But the situation with Whiteley is more complex.

He is still viewed as the Springbok captain in some quarters while Kolisi also enhanced his credentials for the job.

If Vermeulen breezes in and usurps the entire 2017 leadership group as skipper‚ it would spark some intense debate.

But there is no doubt that Vermeulen is a strong candidate for the Boks’ captaincy after five years of proven ability at Test level.

In the 39 Tests he has played the Boks have won 72 per cent of the time‚ which is well above the team’s 65% historical winning ratio.

He is also a proven leader and has regularly captained Toulon.

After fighting hard but failing to get anything from their Premiership clash against Kaizer Chiefs at the weekend‚ Polokwane City coach Bernard ...
Sport
4 years ago