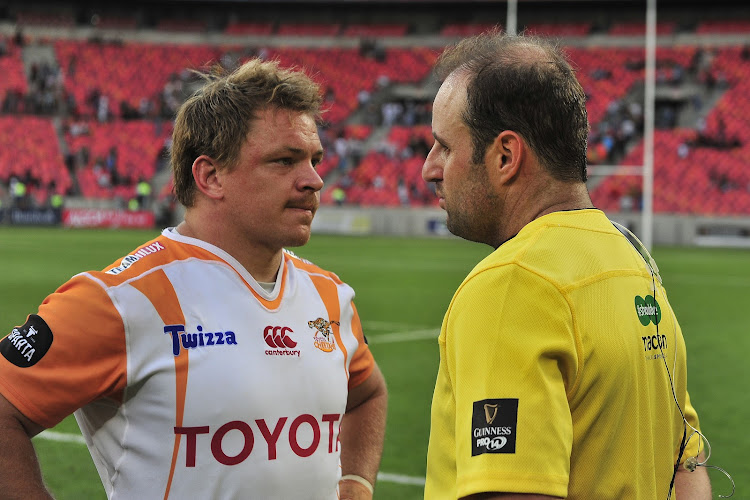 Torsten van Jaarsveld, Captain of the Cheetahs has a word with ref S Berry during the 2018 Guinness PRO14 game between the Kings and Cheetahs at Nelson Mandela Stadium, Port Elizabeth on 13 January 2018.
Image: Deryck Foster/BackpagePix

With seven wins from 12 matches‚ the Cheetahs are still very much in playoff contention in the Pro14 and they can consolidate that position with another win over the Southern Kings this weekend.

The teams clash in Bloemfontein on Saturday and the Cheetahs are widely expected to complete the ‘double’ over the hapless Kings who are still looking for their first win of the campaign.

Some may suggest the Cheetahs are guaranteed a win this weekend‚ but they will want to improve some areas of their play before they resume combat in the northern hemisphere against the Cardiff Blues next month.

The Blues happen to be the side still hoping to reel in the Cheetahs on the conference A points table.

The most obvious area the Cheetahs want to improve in is their discipline. Nine yellow cards have blighted their Pro14 campaign‚ five coming in their last two clashes.

Last weekend Charles Marais‚ Junior Pokomela and Justin Basson were shown yellow cards and if they were up against opposition other than the Kings they may have been made to pay.

A week earlier the temporary banishment of Torsten van Jaarsveld and Shaun Venter helped struggling Benetton to post a win over the Cheetahs.

It isn’t just the cards that have hamstrung the Cheetahs.

They’ve conceded 139 penalties in the competition and averaging double digits per match for your errant ways.

Stand-in captain Van Jaarsveld and coach Rory Duncan have both noted their discipline as an area that needs to be cleaned up.

On the positive side‚ the Cheetahs have played with enterprise allowing Makazole Mapimpi to top the try scoring charts with nine touchdowns.

His 21 clean breaks is another indicator that he has taken his Currie Cup form into European competition.

Another platform the Cheetahs have excelled in is the line-out with Reniel Hugo’s 62 takes a competition high. That in turn has had spin offs for the backs.

The Cheetahs are third in their conference but the competition has a long way to go.

They are behind the high flying Glasgow Warriors‚ who have won 12 of their 13 games‚ and Munster.

The top four teams are spaced out with the Cheetahs fairly comfortably occupying third place 10 points ahead of Cardiff Blues‚ but eight points behind Munster.

While the Cheetahs have very real prospects of advancing to the play-offs due to be played in the first week of May‚ exactly the opposite applies to the Kings.

They are yet to win a game in the Pro 14 and are languishing at the bottom of conference B‚ 10 points behind the second last placed Dragons.

The Kings have had a torrid time losing all 12 games and conceding 67 tries in the process.

Sizzling stepper Branco du Preez will miss the Australasian leg of the 2017/18 World Sevens Series after suffering a hamstring strain in training.
Sport
3 years ago

A mild Los Angeles winter’s afternoon will make way for a sweltering Boland summer’s day for the Super Rugby warm-up between the Stormers and the ...
Sport
3 years ago

Springbok No 8 Duane Vermeulen’s probable return to South Africa in June has muddied the Springbok captaincy waters only a couple of weeks into the ...
Sport
3 years ago