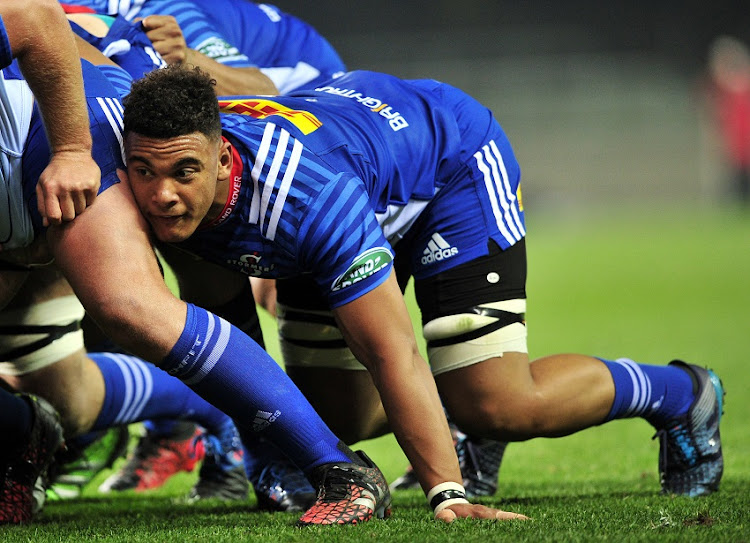 Juarno Augustus of the Stormers during the 2017 Super Rugby game between the Stormers and the Sunwolves at Newlands Rugby Stadium, Cape Town on 8 July 2017 .
Image: Ryan Wilkisky/BackpagePix

The Stormers predictably swatted the SWD Eagles aside in their first pre-season outing in George on Saturday that served as little more than a ‘live’ training session.

The 77-0 margin was less important than the team’s structure while individuals also needed to show some early season form.

There were also no new injuries‚ which came as a relief for coach Robbie Fleck.

Fullback SP Marais‚ returning from a long injury lay-off‚ opened the scoring before the Stormers got their rolling maul working‚ which resulted in a try for hooker Chad Solomon.

The Stormers also wanted to test their defence‚ and while it wasn’t stressed‚ their third try was a result of Wiese closing down space quickly. The Eagles‚ in a panic‚ threw a wild pass for new recruit George Whitehead to intercept and score.

Wiese scored next when he finished off a long build up as the match moved into rout with the Stormers leading 35-0 at halftime after Augustus scored his first try.

The Stormers scored another four tries in the opening 15 minutes of the second half.

Bok wing Raymond Rhule used his pace to score his first try in Stormers colours before Augustus was put away for his second following a great break from lock Eddie Zandberg.

Damian de Allende got on the scoresheet soon afterwards and he was followed by scrumhalf Herschel Jantjies‚ with Marais slotting all four conversions.

Jantjies got his double thanks to some incredible skills from David Kriel who stepped a few defenders on a counter-attack before getting a miracle offload away to the scrumhalf.

The final nail in the Eagles coffin was delivered three minutes from time as the Stormers rushed up on defence‚ with young centre Rikus Pretorius on hand to grab the intercept.