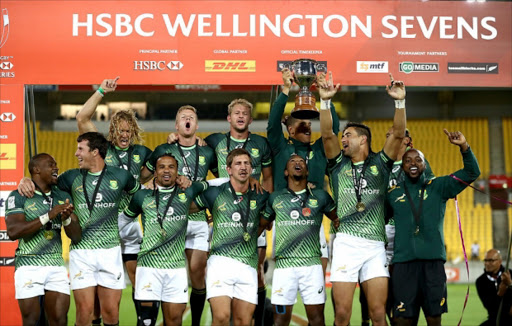 The Blitzboks changed their usual travelling routine by arriving earlier than usual in Australia to prepare for the Sydney leg of the HSBC World Sevens Series at the Allianz Stadium this weekend.

They then have to wait 24 hours for their next matches‚ against Spain and England on Saturday‚ before the knockout phases on Sunday.

"The Sydney tournament does have a bit of a Hong Kong Sevens feel due to the fact that it is played over three days‚” coach Neil Powell said. “We arrived a bit earlier than normal because of that.

"It is not the easiest thing to travel to Australia and New Zealand from South Africa as it does take a day or two to get back into the flow of things.

"We needed to make sure the players had enough sleep and lifted the intensity of training as the week progressed.

"We will have a captain's run on Friday morning‚ although we play later in the day‚ as it works best for our routine.

"We only play after six (09h22 SA time) and it is a long day for the guys to just wait around‚ so the session on Friday will break up the day a bit and get the guys focused on the job at hand."

Powell looked at fine-tuning their preparations this week‚ as he believes the hard work was done at their training base in Stellenbosch already.

The Blitzboks are second on the standings after winning in Dubai and finishing third in Cape Town.

New Zealand top the standings at this early stage after second in Dubai and winning cape town‚ which included beating SA in the Mother City semi-final. "We looked back at what went wrong in Cape Town and it seemed to be a mental thing‚” said Powell.

“We had some technical mishaps‚ but I think the long 2017 season got to the players.

“That said‚ the rest did wonders to all of them and I could feel the intensity and vibe in the air in the last week or so.

"We see this tournament as a bit of a trial run for the Commonwealth Games as well (to be played at Gold Coast in mid-April)‚ so want to go out there and measure ourselves against the best in the world."

Stormers coach Robbie Fleck is backing Springbok centre Damian de Allende to find his best form again after a frustrating two seasons where he was ...
Sport
4 years ago

Just because they have a new coaching staff‚ don’t expect the Lions to abandon the fast-paced game that helped take them to consecutive Super Rugby ...
Sport
4 years ago

In a move that will not to go down very well with some sections of the Loftus faithful‚ head coach John Mitchell says he is not making any promises ...
Sport
4 years ago

The Blitzboks go into the defence of their Sydney World Series title in confident mood despite sitting second on the 2017/18 standings.
Sport
4 years ago