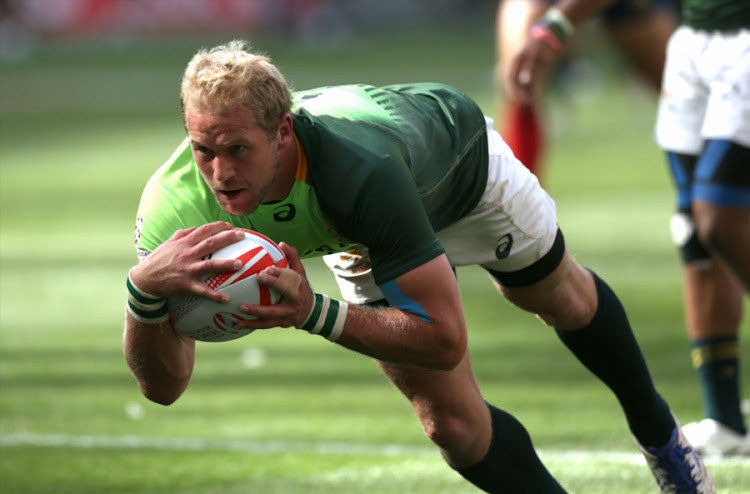 Phillip Snyman of South Africa during day 2 of the HSBC Cape Town Sevens in the game between France and SA at Cape Town Stadium on December 13, 2015 in Cape Town, South Africa.
Image: Carl Fourie/Gallo Images

Blitzbok captain Phillip Snyman will put personal milestones aside as he leads the team in the defence of their Sydney title down under this weekend.

Snyman‚ 30‚ will make his 50th World Series tournament appearance for South Africa‚ becoming only the sixth player to achieve the mark.

While he will no doubt enjoy the occasion‚ it will be much more memorable if the Blitzboks return to winning ways in Australia after losing the semi-finals of last month’s Cape Town sevens.

Losing to New Zealand in the last four‚ allowed the Kiwis to open a small gap at the top of the overall 2017/18 standings by going on to win the final in the Mother City. They have 41 log points to SA’s 39.

Snyman and his team have to ensure that they don’t fall further behind with NZ set to play their home tournament in Hamilton next weekend.

“It is a massive honour for any player to play 50 tournaments and to be able to do it in a Springbok Sevens jersey just makes it even more special for me‚” said Snyman.

“I did not think too much about it‚ to be honest‚ my focus was more to go out and hit the pitch with my brothers and to enjoy that.

"The fact that I can share it with friends and family makes it very rewarding on a personal note.

“We have set goals for ourselves this weekend though and it does not matter whether it is your 50th tournament‚ your first or tenth‚ you need to go out and contribute equally.

"We all have a role to play for the team to achieve their goals.”

The jersey hand-over ceremony‚ where Snyman received a gold cap to commemorate his achievement‚ was special‚ with Kyle Brown (60 tournaments) and Cecil Afrika (55 tournaments) on hand to welcome the sixth Blitzbok ever to play in 50 tournaments.

“It (playing 50 tournaments) was a goal for me‚” he said. “I have never played in a Commonwealth Games‚ so if all goes well‚ I will be able to do that as well in April.

"The Rugby Sevens World Cup in July is another where I hope to be.

“I have been to two‚ but we lost in the quarter-finals in both‚ so I hope to be involved in a team that could perhaps win it‚” added Snyman‚ who also collected a bronze medal in Rugby Sevens at the 2016 Rio Olympics.

Side-stepping whiz‚ Rosko Specman feels that the team needs to atone for slipping up at their home tournament and Sydney‚ one of the team’s favourite stops of the season‚ offers that opportunity.

“We are happy to be back in Sydney – the tournament was good for us in the last year or two‚” Specman said.

“We are keen as a squad to make amends for what happened in Cape Town‚ where we tended to be too individual.

“We need to make sure we stay within our structures. We’ve seen in the past that if we do that‚ we will be successful.

“There is lots of rugby to be played this year‚ but we cannot afford to look further that Friday and Papua New Guinea.

"We need to start strong and lay the foundation for the rest of the weekend.” The Blitzboks meet Papua New Guinea in a Pool C clash on Friday‚ before taking on Spain and England on Saturday in the three-day tournament.

The Blitzboks changed their usual travelling routine by arriving earlier than usual in Australia to prepare for the Sydney leg of the HSBC World ...
Sport
3 years ago

Sizzling stepper Branco du Preez will miss the Australasian leg of the 2017/18 World Sevens Series after suffering a hamstring strain in training.
Sport
3 years ago