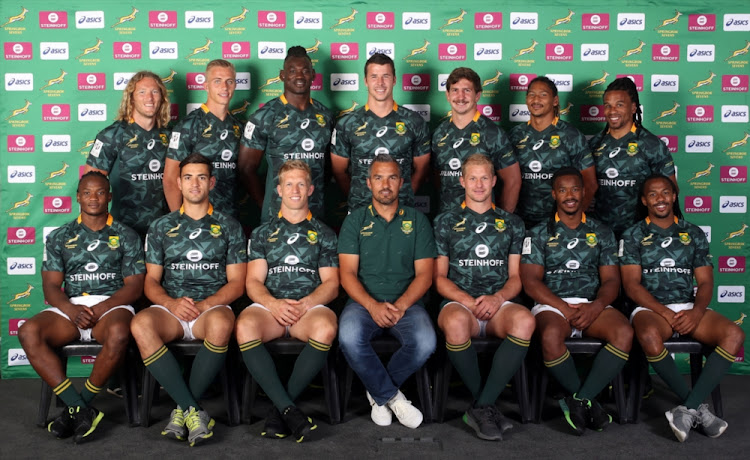 The Blitzbokke team photo during the Springbok Sevens Headshots at Stellenbosch Academy of Sport on November 24, 2017 in Stellenbosch.
Image: Carl Fourie/Gallo Images

The Blitzboks thrashed Papua New Guinea 50-0 in their first match on Friday and added the scalps of Spain 38-0 and England 33-12 on Saturday to top the Pool with England finishing in second.

“We always aim to top the pool‚ but the way we do it is also important. The execution was good and we had two good performances out there today. The guys implemented well today‚” Powell said.

The fact that they kept England in particular under pressure with a good defensive effort also pleased the coach.

“We pride ourselves on our defence. We did well today. We did concede tries‚ but that happens.”

Powell was clear about what needed to be done on Sunday. Kenya will be the first hurdle towards the successful defence of the title they won here last year.

“We need to fix one or two things as we were not sharp in all areas‚ like lineouts. In quarterfinals you cannot afford to make a mistake‚ so it will be important for us to make another step-up on Sunday‚” the coach said.

Despite waiting almost a full day for their one game at the Sydney leg of the World Sevens Series on Friday‚ the Blitzboks did not appear lethargic ...
Sport
4 years ago

Rosko Specman‚ who scored a quick brace against Spain‚ left the field just before half time of that match after an ankle strain and did not play again.

“We decided to pull him from the field and will see how he feels in the morning. We will do a proper medical and hopefully he will be fit to play‚” Powell explained.

Against England the Blitzboks conceded a try in the opening minute‚ but tries by Senatla‚ Cecil Afrika and Geduld regained the lead at the break.

Geduld scored soon after the restart for a 28-7 lead and although England managed another try‚ a second by Senatla confirmed the win. Geduld also kicked four conversions.

The player is already the leading South African points’ scorer of all time in sevens rugby and has now extended his tally to 1 437 points. That moved him past Colin Gregor of Scotland (1 345) on the world list as well.

“I did not even know that‚” Afrika said afterwards.

“It is a great achievement for me. My career had its ups and downs‚ so to be fourth on the overall list is really satisfying for me.

“Obviously I am happy with my contribution today. The important thing is that we need to follow that up with a similar performance on Sunday.”

Blitzbok captain Phillip Snyman will put personal milestones aside as he leads the team in the defence of their Sydney title down under this weekend.
Sport
4 years ago