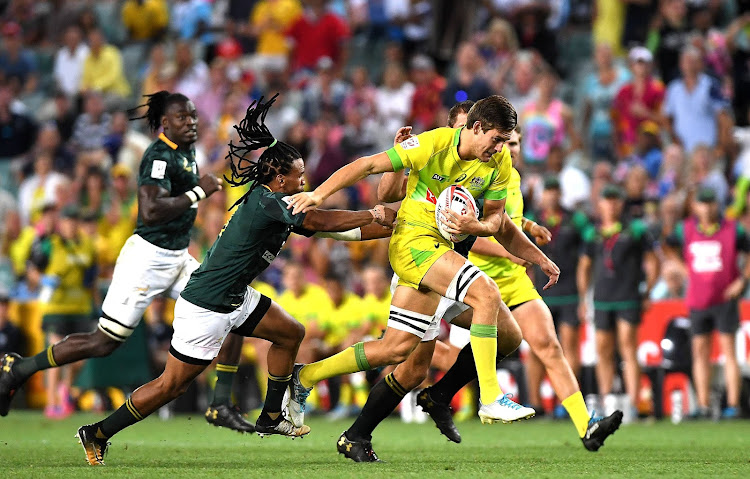 Lachlan Anderson of Australia breaks away from the defence in the MenÃ•s final match against South Africa during day three of the 2018 Sydney Sevens at Allianz Stadium on January 28, 2018 in Sydney, Australia.
Image: Bradley Kanaris/Getty Images

After putting their opponents to the sword in five matches leading up to the Sydney Sevens final on Sunday‚ the Blitzboks were beheaded by a rampant Australia in the final.

The Sevens Wallabies walloped the Blitzboks 29-0 to inflict the South Africa’s heaviest defeat in years as they captured their home title for the first time in 16 years.

Despite the carnage in the final though‚ the Blitzboks will leave Sydney and head to Hamilton for round four of the 2017/18 World Series on top of the standings with 58 points.

New Zealand went into Sydney with a two-point lead over SA but at the end of the weekend had slipped four points behind with 54. Australia are up to third on the standings with 43 points as they became the third different winner in three tournaments this season.

South Africa started the final without influential captain‚ Philip Snyman due to a hamstring injury‚ and earlier lost Ruhan Nel to a sprained knee.

Earlier on day three‚ the Blitzboks proved way to slick for the USA in the semifinal‚ beating them 35-7 after a 17-0 win over Kenya in the Cup quarterfinals took them into the last four.

They scored the most tries in the tournament (27) and made the most tackles‚ but that did not result in another title.

The home side‚ who last won a tournament on home soil in 2002‚ had too much firepower for the defending champions‚ who trailed 14-0 at the break.

There was very little on attack coming from the Blitzboks and they slipped off 25% of their tackles‚ something that did not please coach Neil Powell.

"There is not much to be happy about the final‚” Powell said. “We had a couple of chances in the first half‚ but we were not clinical enough. Even in first phase we were poor‚ lost two of our scrum feeds‚ and had a poor option from a lineout as well.

“We were still in at halftime‚ but once they got momentum in the second half‚ we could not stop them."

Powell said his team’s defence was good during the weekend‚ but poor in the final. "We only conceded two tries all day‚ but then five in the final‚” he said.

“That was very disappointing.

"Fact is teams are getting better all the time.

"We had three tournaments and three different winners. We must make sure we stay ahead of the pack.

"We have another opportunity in New Zealand next weekend‚ so will need to make one or two adjustments when we get there."

A call on the fitness of Snyman and Ruhan Nel for Hamilton will be made in the next 24-36 hours.