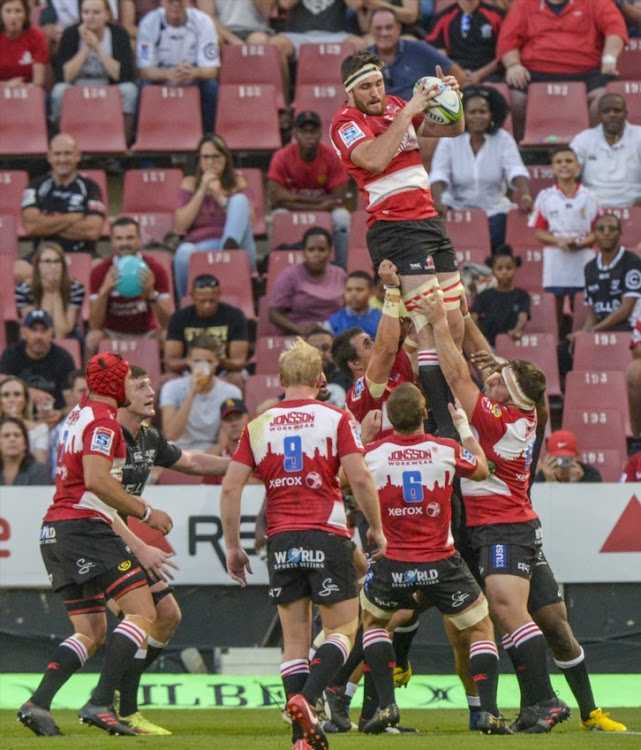 Lourens Erasmus of the Lions with possession during the Super Rugby match between Emirates Lions and Cell C Sharks at Emirates Airline Park on February 17, 2018 in Johannesburg.
Image: Sydney Seshibedi/Gallo Images

If you never hear the name Aphiwe Dyantyi again, chances are you are about to be abducted by aliens, or worse.

The Lions winger made an electrifying entry into Super Rugby here against the Sharks yesterday (on Saturday) and it would not be a stretch to suggest his name in the not too distant future, will glow in blinding light.

He had limited opportunities but the one half chance he got in the first half he grabbed with hands and feet.

The assured manner in which he collected a pass destined to go out behind him, his turn of speed, deft stab through with the boot and regather were hallmarks of a player imbued with skill and emboldened with confidence.

The injured Courtnall Skosan, you sense will find it extremely difficult to wrest the No11 jersey off him.

That try had tongues wagging and it also served to get the Lions' tails up up after a mildly subdued start.

The Lions, on the back of crucial rearguard interventions and ruthlessness in attack eventually had the measure of the persistent Sharks.

The hosts gradually got a foothold in this game but made heavy weather of not going beyond the Sharks' reach in the closing stages. Elton Jantjies' errant boot is partly to blame.

They also made mistakes that proved costly.

When Malcolm Marx, South Africa's most recent inductee to the ranks of player of the year, failed to find his intended target for a second time, it presented the Sharks the platform from which to set up camp close the Lions' tryline in the first half.

Concerted attack by the Sharks ultimately brought reward when Robert du Preez bust through a Jantjies tackle to score.

Du Preez is a splendid fit for the Sharks' direct, all too often, confrontational approach. He engages defenders and possesses the passing game to deliver threat in wider channels.

Altough the loss of Pat Lambie is huge, the addition of Du Preez seemed to have handed the Sharks an extra arm and a leg.

Lions' fullback Andries Coetzee picked up where he left off for the Springboks in Cardiff. He hoofed his first touch down the middle of the field and the ball bounced merrily into the in goal area before the North Stand mercifully brought it to a halt.

A more obvious Coetzee blemish cost the Lions dearly. He got his wires slightly crossed with Jantjies and grassed the kick-in just after the Lions established a nine-point cushion following a second try by centre Lionel Mapoe.

That was a move in which Coetzee was instrumental but by failing to gather the resultant restart he handed the Sharks prime position to attack and the visitors duly profited when Makazole Mapimpi went over unchallenged.

Early on the Sharks looked the more assertive as they hustled and scrapped for every ounce of possession.

Outside him Lukhanyo Am proved a cul-de-sac for some of the Lions' advances but the Sharks generally did a sterling job in keeping home team ball carriers from going to ground.

The Lions' composure and patience eventually wore them down however.

The result may prove significant within the context of the South African conference which is likely to be more closely contested than last year.

It had been suggested that the Lions may no longer be the force they were the last two seasons and that their time in the vanguard of the domestic challenge had passed.

With just one defeat in their last 22 derby matches it would appear the rest may yet have some catching up to do.