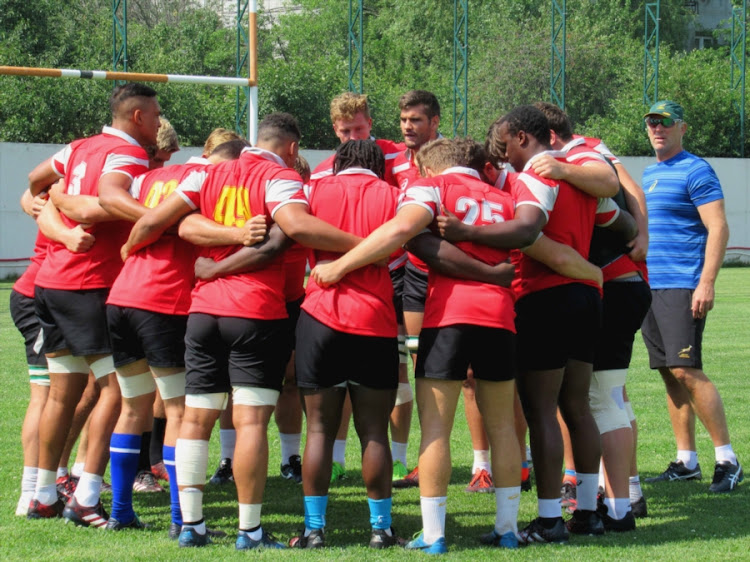 Junior Springbok coach Chean Roux watches on as the forwards are in a huddle during the Junior Springboks training at Lelo Arena on June 06, 2017 in Tbilisi, Georgia.
Image: Zeena Isaacs/Gallo Images

It’s been six years since the Junior Springboks last won the Under-20 World Championships‚ and this year they are taking their preparation to a higher level in an effort to change that statistic.

Coach Chean Roux will oversee four intense training camps‚ a tour to the Britain and five U20 ‘Tests’ in the coming months before the tournament‚ which will give the county’s best youngsters a fighting chance.

In 2018 France hosts the World Championships for the second time in this format – the last time was in 2013 where the Junior Boks finished third.

The team’s preparations will kick off from Tuesday to Friday with the first of three four-day training camps in Stellenbosch – the last of which will conclude on 30 March – followed by a two-week camp in April and a UK tour in May.

They will play five internationals in the lead-up to the tournament.

The first two matches will be against World Rugby U20 Championship pool opponents Georgia in Cape Town on back-to-back Fridays‚ 13 and 20 April respectively‚ while they will meet Scotland in Edinburgh on Friday‚ 4 May‚ Wales in Cardiff on Tuesday‚ 8 May‚ and England in London on Friday 11 May on their overseas tour.

“This preparation schedule is ideal to ensure that we arrive in France well prepared both mentally and physically for the U20 Championship‚” said Roux.

“By having four-day camps in February and March we will also avoid a situation where the Varsity Cup players miss a few days of training due to their team commitments.

“We faced Georgia in Tbilisi in the pool stages of the U20 Championship last year and they have again been drawn in our pool this season‚ so the two encounters against them will be good preparation for both sides.

"They are physical and determined opponents‚ and these matches will give the players a good idea of what to expect in France.

“The UK tour will be equally important as the training schedule‚ the frequency of the matches and the tough competition on tour will be similar to that which the players will experience in France‚ especially with all three opposition teams also participating in the tournament.”

Another member of the 2017 U20 Championship squad‚ Damian Willemse‚ was also invited to the camp‚ but he is on tour with the Stormers.

Roux said the door was open for players outside the group to play their way into the training squad: “We had to select a limited number of players for the first camp‚ so this group is by no means the only players we will be watching.

“We will continue to keep an eye on other players who perform well‚ so the group could change as our preparations continue.”

Former Springbok great Juan Smith would be a strong candidate for a list of the top five SA players since readmission‚ so it’s no wonder that ...
Sport
3 years ago

Former Springbok coach Peter de Villiers has asked if Johan “Rassie” Erasmus is really the Messiah he's been out to be.
Sport
3 years ago

The Stormers will use their challenging three-match Australasian tour to bond as a team off the field as much as on it‚ according to captain Siya ...
Sport
3 years ago

More depth‚ more experience‚ more punch were qualities the Sharks were said to bring into this Super Rugby campaign.
Sport
3 years ago