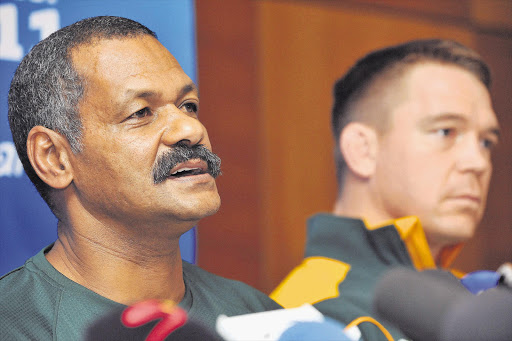 Former Springbok coach Peter de Villiers said his successors Heyneke Meyer and Allister Coetzee should have approached him for advice ahead of taking the Bok job.

Meyer and Coetzee had vastly different tenures as coaches but shared the same fate of not doing well against the All Blacks.

Meyer only won one Test against New Zealand at Ellis Park while Coetzee was subject to two embarrassing 50-point clobberings against Steve Hansen's side in Durban and Albany respectively.

Meyer parted ways with the South African Rugby Union after the 2015 Rugby World Cup where the Springboks finished third after losing to the All Blacks in the semi-finals.

Coetzee may have been part of the 2007 Rugby World Cup winning coaching group but as the man in the hot seat‚ his two years in charge saw him win 11 out of 25 tests.

“The biggest disappointment is that neither Allister Coetzee nor Heyneke Meyer made the time to talk to me about how badly I was treated so they could know whether they could turn left here or they're moving in the right direction.

"Rassie Erasmus came with us to the 2011 Rugby World Cup for four weeks and Heyneke chose to speak to Rassie over four years of experience and that made me think?

"Wow‚ you're the luckiest person in South Africa because the system expected me to be three times better than any other coach in South Africa to get the job‚” De Villiers said.

De Villiers also said Saru must look at their grass-roots structures‚ which De Villiers likened to the drought that is currently gripping large parts of the Western Cape.

“When you look back at where you started and where you are now‚ how did you develop?

"I respect you for the knowledge you have then I try to get you to where you are now and that's what people don't understand.

"Our grass-roots level is like Cape Town at the moment.

"There's no grass‚ there's no water and the roots are gone‚” De Villiers said.