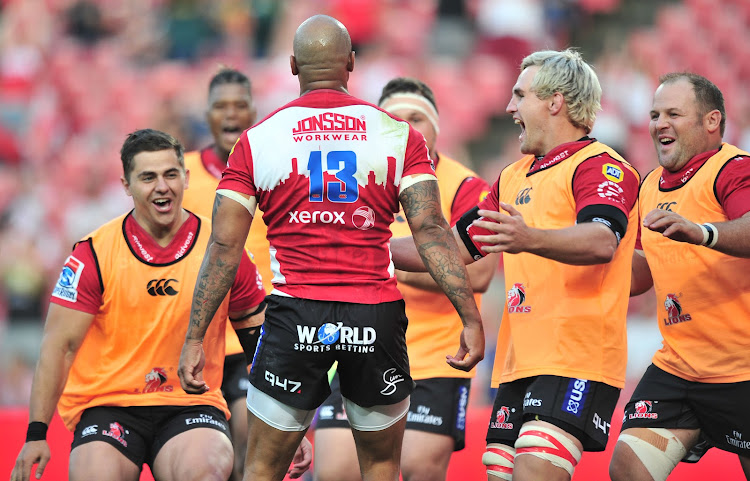 Lionel Mapoe celebrates with teammates after scoring a try with during the 2018 Super Rugby match between Lions and Sharks at Ellis Park Stadium, Johannesburg on 17 February 2018.
Image: Samuel Shivambu/BackpagePix

Discipline‚ or lack thereof‚ will be one of the deciding factors when the Lions host the Jaguares at Ellis Park on Saturday.

Maintaining discipline is an area of focus for the Lions this season but it is not necessarily a pursuit in which they expect the visitors to excel.

"That way we can put together phases and build pressure and that in turn will force the Jaguares to lose their discipline."

The Jaguares conceded 15 penalties against the Stormers and a similar tally will make for another long afternoon at Ellis Park.

De Bruin‚ however‚ is also all too aware of their potency with the ball.

"They carry the ball extremely well. They play an interesting style of attack.

"They've got a good nine‚ 10 combination. Their whole spine is good. They don't have many weaknesses. You have to be on top of your game to beat them."

The Lions' weren't entirely on top of their game in their win over the Sharks last week.

Coach Philip (Lemmer) and Franco (Mostert) worked hard at that. We believed it is sorted out‚" said De Bruin about their troubles in the line-out.

"I think we were just slow to be honest‚" opined captain Warren Whiteley.

"We were slow to react. Some of our calls weren't good. We've worked on it‚ our speed and reaction."

De Bruin retained the same starting XV he named to play the Sharks. Lock Andries Ferreira was earmarked to play but a stomach bug meant he had to sit out. He's back up‚ and running.

On the bench‚ however‚ De Bruin has introduced scrumhalf Marco Jansen van Vuren to alleviate the burden on Ross Cronje.

"Marco trained very well he has to play.

There is not too much disruption in the starting XV. We will introduce younger players when the opportunity presents itself."

Although the Jaguares came up short at Newlands they've presented the Lions' problems.

Since the Jaguares' introduction to Super Rugby in 2016‚ the Lions have found the going mostly tough against the South Americans.

They lost both matches in Buenos Aires and won narrowly 24-21 at Ellis Park last year. The Lions were however rampant winners in their first ever clash in 2016.

Stormers beef up for Waratahs

Stormers coach Robbie Fleck has beefed up his side with inclusion of lock Pieter-Steph du Toit‚ centre JJ Engelbrecht and fullback SP Marais for ...
Sport
3 years ago

Can the Jaguares maul the Lions in Johannesburg?

Former Springbok great Juan Smith would be a strong candidate for a list of the top five SA players since readmission‚ so it’s no wonder that ...
Sport
3 years ago

The Stormers will use their challenging three-match Australasian tour to bond as a team off the field as much as on it‚ according to captain Siya ...
Sport
3 years ago

More depth‚ more experience‚ more punch were qualities the Sharks were said to bring into this Super Rugby campaign.
Sport
3 years ago