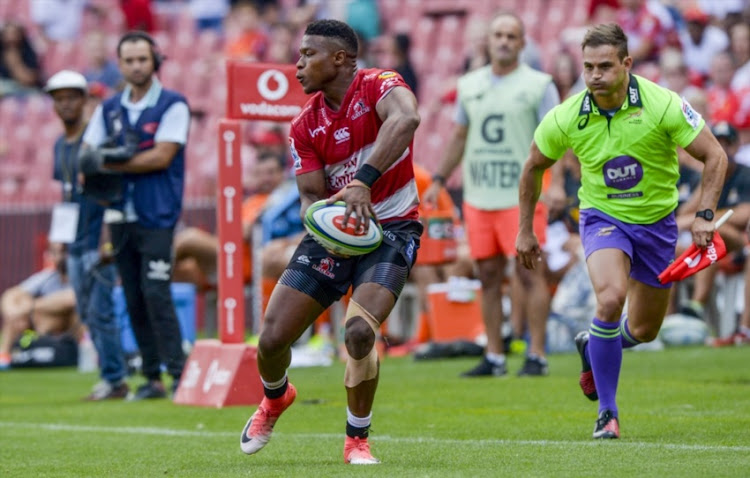 Aphiwe Dyantyi of the Lions during the Super Rugby match between Emirates Lions and Jaguares at Emirates Airline Park on February 24, 2018 in Johannesburg.
Image: Sydney Seshibedi/Gallo Images

The Lions may be lacking in sugar, spice and everything nice but in Aphiwe Dyantyi, they have all they need.

Swys de Bruin's side still need to rediscover the patience and discipline that made them such a feared side in the past two seasons.

However, Dyantyi's magic glossed over their error-strewn performance. His brace and assist made the Lions look reasonably good.

A better side would have punished the Lions, especially in the first half but showed enough inventive resolve to earn a comfortable win.

There were mistakes, especially on defence and attack that require urgent rectification. However, they also displayed an unending industriousness that'll also worry their opponents once they find fluency.

The key missing ingredient for the hosts was the final pass. They went through the phases well and picked the gaps in defence. There was a worrying over eagerness that clouded their rugby judgement.

In future encounters, they may not be so fortunate and in the first half, the Jaguares were a resourceful unit that took the points that came their way.

Emiliano Boffelli crossed the chalk in the fourth minute from a simple linear backline movement and added a long-range penalty 15 minutes later to give the visitors a 10-0 lead.

It wasn't like they were having the better of the Lions. The majority of the rugby was being played in the Jaguares half and the Lions were owning the collisions.

It was Dyantyi's 28th minute try that gave the Lions the necessary boost in the aftermath of their forgettable first quarter.

Referee Jaco Peyper then entered the fray in the 33rd minute when he gave the Lions a contentious penalty try and right wing Bautista Delguy a yellow-card for deliberately knocking the ball down.

There was nothing untoward though with Andries Coetzee's 39th minute try when a Lionel Mapoe offload found him in the right place at the right time.

However, there were many of those offloads that didn't go to hand, killing whatever momentum the Lions created.

Energised by the crucial try, Dyantyi's pace and accurate pass put Sylvian Mahuza away on the right hand touchline from a wrap-around move eight minutes after the restart.

Four minutes later, Dyantyi then turned on his own afterburners and showed the Jaguares defence a clean pair of heels from just inside their own half to complete his brace.

The try was sweetened by the mother of all sidesteps he pulled, turning Delguy inside out like a ripened orange.

While the Lions added a further 65th try through Rohan Janse van Rensburg, Delguy landed a quick brace that worried the 10 000 strong crowd.

However, captain Warren Whitely added a late try to rubber-stamp their second half dominance.