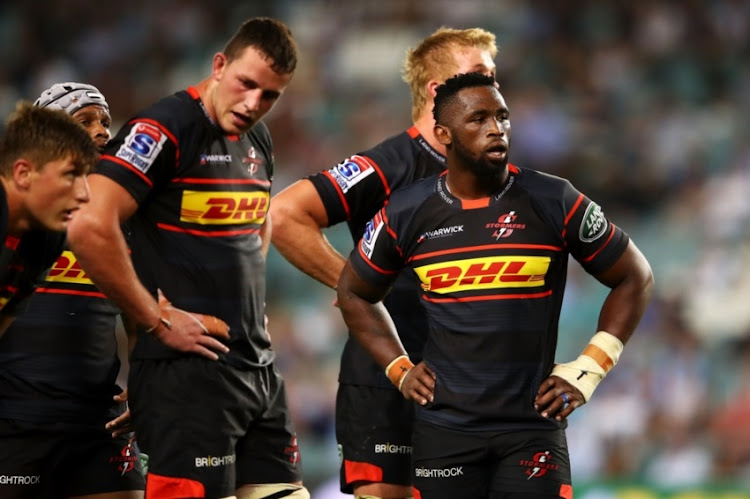 Siya Kolisi of the Stormers watches on during the round two Super Rugby match between the Waratahs and the Stormers at Allianz Stadium on February 24, 2018 in Sydney.
Image: Mark Kolbe/Getty Images

Muir and his jumpers failed to connect twice late in the game and from the second botched lineout‚ Waratahs flank Ned Hanigan scored the winning try.

The result has put pressure on the Stormers in the build-up to a huge challenge against the defending champion Crusaders in Christchurch this weekend.

“They were placed exactly where they were supposed to be‚ but our lifters and jumpers had a misunderstanding and we all saw the result.

"It was the lifters‚ jumpers and the movement that let us down. The forwards were disappointed and had a long chat about it after the game.

“They were options we have trained but people got some things wrong. It was the same for the backs earlier in the game. They created opportunities during the match and left them out there. We have to be more clinical.

“In the sheds afterwards the forwards spoke about what happened in the last seven or eight minutes of the match. Pieter-Steph du Toit and a few others were fairly direct.”

The Stormers are also sweating on the fitness of flyhalf Damian Willemse who left the field early in the second half on Saturday.

"Damian suffered a haematoma to his quad - he got a big knock‚” Feeney said. “His availability depends how he comes through in the next 48 hours.

"If we were playing on Thursday‚ he wouldn't be able to play‚ so we are going to see how he goes over the next 48 hours. We will assess him day to day.

“Damian is our starting flyhalf but we have confidence in George Whitehead. He did a reasonable job when he came on against the Waratahs and he will have learnt from that experience.”

Facing the Crusaders though‚ remains a huge challenge for any team‚ but particularly for the Stormers who suffered a massive 57-24 in Christchurch in the corresponding fixture last year.

In 10 visits to play the Crusaders‚ the Stormers have never won in New Zealand.

“When you have the Crusaders score 45 points against the Chiefs‚ that gets your attention as a defence coach because it’s a pretty good start‚” Feeney said.

“They looked sharp and scored some good tries and maybe in Ronan O’Gara‚ their new backline coach‚ they are benefiting from a new voice.

"There is no doubt that we are going to have to be up for it on Saturday.

“We talked about playing the Crusaders and the boys see it as an opportunity.

"We all know what happened against them last year and it’s in the back of the mind‚ but it’s a challenge.

“We can’t wait to get back down there and show them how we can really play the game.

"Of course we know it will be difficult‚ but hitting them early in the season is a good time because it gives us a chance to assess where we stand with our own processes.”

The Stormers’ Australasian tour has become a lot tougher after they threw away victory against the Waratahs in Sydney on Saturday and now face a ...
Sport
4 years ago

After they stunned Hurricanes to start their season on a winning note on Saturday‚ Bulls coach John Mitchell has urged his players to keep their feet ...
Sport
4 years ago

Hurricanes coach Chris Boyd praised the Bulls while delivering a damning assessment of his team’s performance following their 21-19 defeat at Loftus ...
Sport
4 years ago