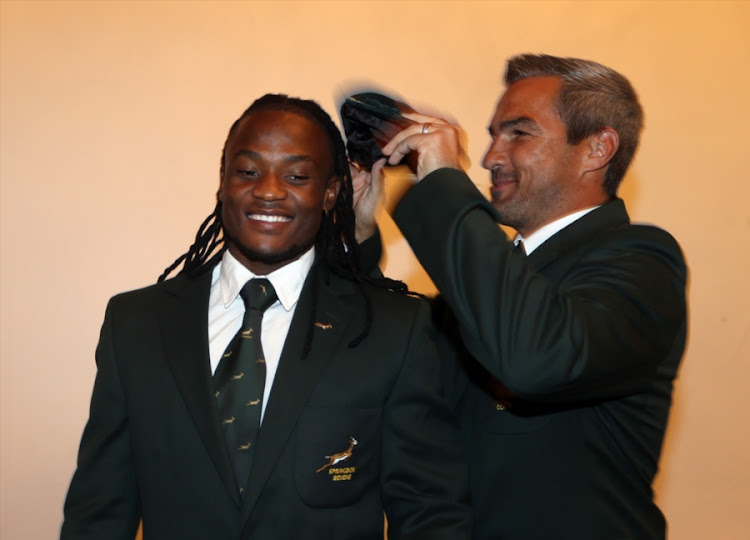 After travelling for 34 hours‚ a depleted Blitzboks arrived bleary-eyed in Las Vegas with slightly lowered expectations for the fifth leg of the HSBC World Sevens Series this weekend.

The team flew from SA to London‚ where they had a nine-hour layover before an 11-hour flight onwards to Vegas.

They also go into the into the North American leg of the Series without first choice six players due to injury and Super Rugby commitments.

Record try-scorer Seabelo Senatla along with forwards Kwagga Smith‚ Tim Agaba and Sikhumbuzo Notshe are back at their respective Super Rugby franchise while Justin Geduld and Rosko Specman are injured.

Considering the travel and player loss factors coach Neil Powell is realistic about the challenge the team faces in the next 11 days.

“I guess‚ under the circumstances and acceptable goal for the next two weeks would be reaching the finals of both tournaments [in Las Vegas and Vancouver]‚” Powell said.

“It would be a bonus to win one of the two.

"We are depleted but we have experience in most positions and we can still select an experienced starting team.

“There are some inexperienced players on the bench but they have been in the system for a year or so‚ so we are still confident.”

The Blitzboks have a tough draw in Pool B where they come up against Wales‚ Canada and England – all teams that will also expect to make the Cup quarterfinals.

“We are drawn in a difficult pool in Vegas‚ and our biggest challenge is to top it on day one.

"It’s a very physical group so we will have to be at our best to get through‚” Powell said.

The Blitzboks currently head the overall standings with 77 points after winning in Dubai and making the finals in Sydney and Wellington.

They are eight points clear of New Zealand‚ and despite this Powell admits that they could have done a little better to this point.

“We had an opportunity to win in Hamilton‚ and had we won I would agree that we did as well as we could’ve in the first four tournaments of the season‚” Powell said.

“We had our chances in the final against Fiji and didn’t take them‚ so besides that I’m happy with our effort so far.

“Now our challenge is to see if we can be successful without so many players. This is when we rely on our Academy system and the players it’s bringing through‚ to test if we’re on the right track.

“Hopefully the system will look after us and the new players will slot into our patterns seamlessly.”

‘What happens in Vegas stays in Vegas’‚ is an old adage and one the Blitzboks will take to heart as they hope their depleted squad will all stay in ...
Sport
3 years ago

The Blitzboks’ injury problems are mounting as the World Sevens Series campaign reaches the halfway mark with news that playmaker Justin Geduld will ...
Sport
3 years ago