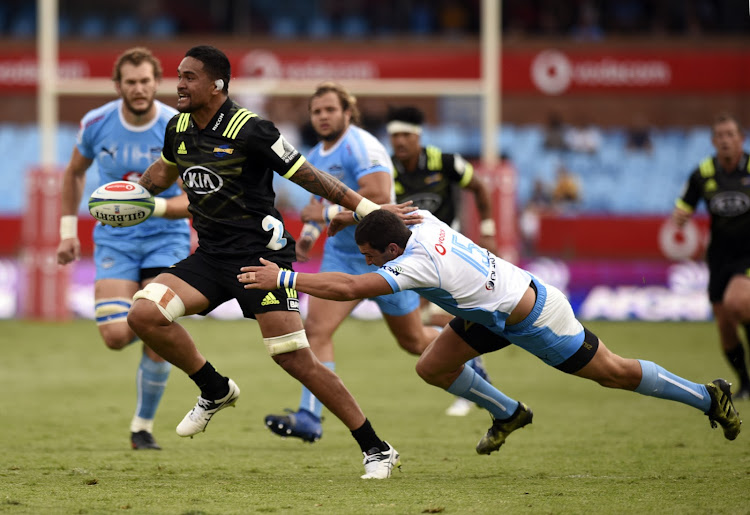 Vaea Fifita, of the Hurricanes and Warrick Gelant, of the Vodacom Bulls during the 2018 Super Rugby game at Loftus Versveld, Pretoria on 24 February 2018.
Image: Catherine Kotze/BackpagePix

The Bulls face a possible backline problem when they take on bitter rivals Lions in the highly anticipated Super Rugby derby clash at Loftus on Saturday.

The Bulls‚ who started their campaign with a morale-boosting win over the Hurricanes at home last weekend‚ may be without key fullback Warrick Gelant and centre and captain Burger Odendaal who are racing against time to be fit for the weekend.

Odendaal suffered a bruised rib during the battle against the Hurricanes while Gelant missed the season opener due to a knee niggle and the Bulls medical team are working around the clock to have them ready to face the Lions.

Bulls team doctor Herman Rossouw has confirmed that they will wait until later in the week to see if the two influential players have responded well to treatment and are ready for what is expected to be a bruising battle.

“Burger (Odendaal) suffered a bruised rib during the match against the Hurricanes last weekend and Warrick (Gelant) has started with some selected sessions this week.

"We’ll make a final decision on their availability later this week‚” said Rossouw in his injury update.

In the absence of Gelant last weekend‚ head coach John Mitchell threw young Divan Rossouw into the deep end and he repaid the faith that was shown in him by giving a solid performance on his Super Rugby debut and against the experienced New Zealand side.

The good news for the Bulls is that locks Jason Jenkins and Aston Fortuin‚ and Springboks Sevens loose forward Tim Agaba have been passed fit for the Lions showdown even though they are likely to start on the bench.

If the Bulls manage to beat the Lions‚ who started their campaign with a win 47-27 win over the Jaguares last weekend‚ they will travel overseas to take on the Reds‚ Chiefs and Crusaders in the coming three weeks with confidence sky high.

A new Springbok era under coach Rassie Erasmus will not start against England at Ellis Park on June 9 as expected‚ but a week earlier against Wales ...
Sport
4 years ago

The Stormers’ Australasian tour has become a lot tougher after they threw away victory against the Waratahs in Sydney on Saturday and now face a ...
Sport
4 years ago

After they stunned Hurricanes to start their season on a winning note on Saturday‚ Bulls coach John Mitchell has urged his players to keep their feet ...
Sport
4 years ago