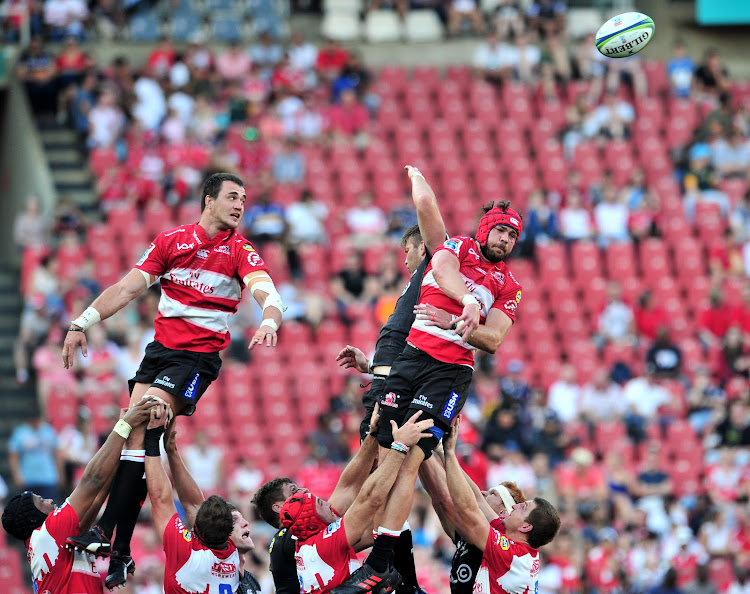 Franco Mostert and Warren Whiteley of the Lions during the 2018 Super Rugby match against the Sharks at Ellis Park Stadium, Johannesburg on 17 February 2018.
Image: Samuel Shivambu/BackpagePix

The Lions have been forced into a significant change in their backrow for Saturday’s Jukskei Derby against the Bulls.

Flank Kwagga Smith is on compassionate leave this week and will miss the crunch clash against the Lions’ neighbours.

Given Smith’s sheer industry and explosiveness around the contact areas the Lions‚ perhaps in recognition that they cannot make a like for like replacement‚ have opted to move Franco Mostert from the second to the back row.

He will wear the No7 jersey while the Kyle Brink moves to six with Marvin Orie replacing Mostert in the second row.

The reshuffle in the pack is a calculated risk but the Lions may also have been guided by the dominant performance of Bulls’ locks RG Snyman and Lood de Jager against the Hurricanes last weekend.

The Lions have opted to bolster their options in the one area where they have been off the mark in their first two matches against the Sharks and the Jaguares.

Mostert’s move to the No7 jumper will give the Lions more bulk and height at the tail of the line-out but they will miss his presence in the middle where he has performed as their banker in recent seasons.

Still‚ it leaves the elongated Orie and the more muscular Andries Ferreira to rise to the occasion.

Quick off the top possession will suit the Bulls’ quick tempo-ed approach and may for the second week running provide a platform for their second rowers to poke holes from second phase onwards.

Smith will be sorely missed as he would have been one of the Lions’ most potent counter punchers this weekend. Instead the burly Brink will have to play towards the ball with captain Warren Whiteley maintaining roving role at No8.

His ability to get around the park will be key as the Bulls are likely to stretch play at Loftus.

It it however worth noting that Whiteley is still in the throes of getting up to speed following long term injury.

Among the backs the confrontational Rohan Janse van Rensburg has been introduced into the midfield at the expense of Harold Vorster who drops to the bench.

Vorster’s demotion means Howard Mnisi falls out of the match day squad but Madosh Tambwe returns to the timber.

Lions team to play the Bulls:

The Bulls face a possible backline problem when they take on bitter rivals Lions in the highly anticipated Super Rugby derby clash at Loftus on ...
Sport
3 years ago

After they stunned Hurricanes to start their season on a winning note on Saturday‚ Bulls coach John Mitchell has urged his players to keep their feet ...
Sport
3 years ago

Hurricanes coach Chris Boyd praised the Bulls while delivering a damning assessment of his team’s performance following their 21-19 defeat at Loftus ...
Sport
3 years ago

Bulls new era under coach John Mitchell in Super Rugby is up and running after they recorded a hard fought and vital 21-19 victory over fancied ...
Sport
3 years ago