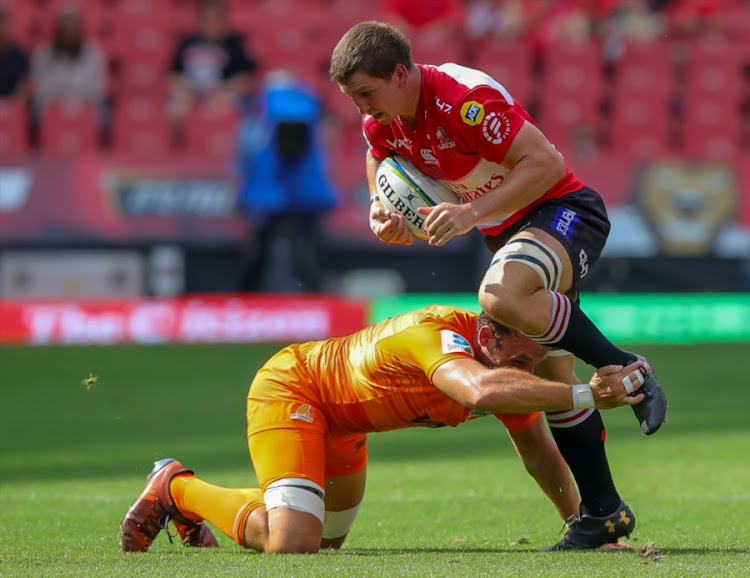 Kwagga Smith of the Emirates Lions during the Super Rugby match against the Jaguares at Emirates Airline Park on February 24, 2018 in Johannesburg, South Africa.
Image: Gordon Arons/Gallo Images

Record try-scorer Seabelo Senatla and bruising forward Kwagga Smith have been named in the Springbok Sevens team for the Commonwealth Games‚ even though they won’t play any part in the remainder of the current World Series.

Senatla‚ who has scored 219 tries in his World Series career‚ is on Super Rugby duty with the Stormers.

Smith and Tim Agaba‚ looseforwards for the Lions and Bulls respectively‚ have also been named in the 12-man team for the Games in the Gold Coast in April.

Those three players all withdrew from the Springbok Sevens to concentrate on 15s‚ but the plan was always to include them in the Commonwealth Games team.

“It works out quite well actually because the Games fall on an off weekend for the Lions in Super Rugby‚” Smith said.

“And then the Lions come to Sydney for their Super Rugby tour and I might already be over there‚ which makes it doable.

“I have won a Commonwealth gold medal but I want to do it again‚ and also maybe win an Olympic Gold medal in 2020 as well.”

At the same time‚ the Springbok Women’s Sevens team will be in action for the first time at this international showpiece‚ which takes place from 4 to 15 April.

SASCOC named the South African team to represent the country at the prestigious event‚ which for the first time will include a women’s sevens competition.

In all‚ Team South Africa athletes will do battle across 16 codes. Seven members of the gold medal-winning team to Glasgow in 2014 are back for another taste of Commonwealth Games action.

The Blitzboks have been drawn in Pool A with Scotland‚ Papua New Guinea and Malaysia for the sevens tournament‚ which is scheduled for 14-15 April at the Robina Stadium.

The Springbok Women’s Sevens will face New Zealand‚ Canada and Kenya in their pool matches.

The Rugby Sevens teams are:

‘What happens in Vegas stays in Vegas’‚ is an old adage and one the Blitzboks will take to heart as they hope their depleted squad will all stay in ...
Sport
3 years ago

The Blitzboks’ injury problems are mounting as the World Sevens Series campaign reaches the halfway mark with news that playmaker Justin Geduld will ...
Sport
3 years ago