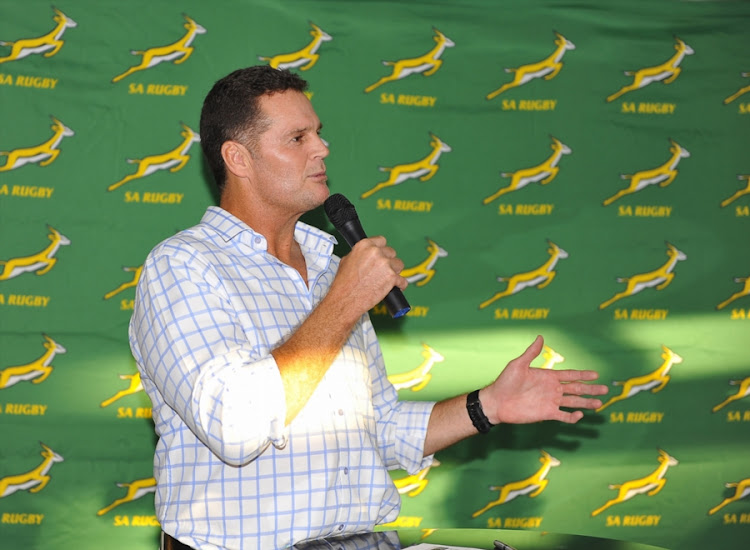 SA Rugby Director of Rugby Rassie Erasmus, who is tipped to take over as Springboks caoch at a press conference scheduled for Thursday March 1 2018, speaks during the SA Rugby Academy Welcoming Function at Stellenbosch Academy of Sport on February 01, 2018 in Cape Town, South Africa.
Image: Ashley Vlotman/Gallo Images

The worst kept secret in rugby will be official on Thursday when Rassie Erasmus is presented as the new Springbok coach‚ a month after Allister Coetzee was sacked.

Erasmus‚ 45‚ will become the 14th man to be appointed since 1992‚ when SA was allowed back into international sport.

The former Bok flank‚ who is currently employed as SA Rugby’s director of rugby‚ will retain his current title and it remains unclear if he will also take on the title of ‘Springbok coach’.

What is clear is that the buck stops with Erasmus and results‚ tactics and all the other factors that come with the job‚ will be his responsibility.

Job titles may be opaque‚ but Erasmus is going to be the man in charge.

Nienaber worked with Erasmus at the Cheetahs‚ WP/Stormers and at Munster in Ireland. The two virtually come as a package deal.

Former Blitzbok player Stick will take on the role of skills coach while former French prop Pieter de Villiers will also be on the management ticket as scrum coach and perhaps a broader role with the forwards.

Stick and De Villiers have both worked with previous Bok regimes – the former in 2016 under Coetzee‚ and the latter as a consultant under Heyneke Meyer between 2012-15.

In late January‚ in a parting shot to SA Rugby chief executive Jurie Roux‚ Coetzee fired off an angry letter questioning Erasmus’ credentials while also wondering aloud about the sense of appointing a white coach.

TimesLIVE is in possession of the letter.

Coetzee laments that black administrators such as president Mark Alexander and deputy president Francois Davids instructed Roux to inform him that he was to be sidelined.

Understandably he refused the indignity of that demotion‚ which was probably SA Rugby’s hope.

Coetzee also accused SA Rugby of somehow manipulating Erasmus’ appointment‚ although there isn’t any detail on how‚ and despite the fact that he had been in Ireland for almost the entire duration of Coetzee’s tenure.

“The stratagem devised by SARU offends the Transformation Charter of SARU‚” Coetzee wrote.

“Firstly‚ it is distasteful‚ to say the least‚ to use me‚ as a black South African‚ as a pawn in a manner which can only be described as deeply reprehensible.

“The stratagem is clearly‚ in my view‚ unconstitutional because it infringes my right to dignity and equality.

"It also aims to defeat‚ in an unconstitutional manner‚ the ideals and values entrenched in the Constitution.

"The fact that those who mandated you [Roux] to inform me of SARU’s decision are persons of colour makes it even more regrettable.

“Secondly‚ notwithstanding SARU’s clear commitment to adhere to its Transformation Charter and its stated intention to eradicate discrimination on any grounds‚ Rassie’s appointment‚ with respect‚ does not give effect to transformation of rugby in general.

“It is astonishing that SARU had mandated you to inform me that they plan to reduce me to a ceremonial coach who must answer to Rassie who‚ with respect is a lesser qualified coach.”

Erasmus‚ like Coetzee at the time of his appointment in 2016‚ does not have head coach experience at Test level.

Neither did Kitch Christie‚ Nick Mallett‚ Jake White and Peter de Villiers – SA’s four most successful post-isolation coaches – when they were appointed.

Erasmus was head coach of the Cheetahs for three seasons‚ director of coaching at Western Province for another three seasons‚ as well as High Performance manager at SARU for four years before taking up a similar position at Munster.

The Cheetahs won the Currie Cup twice on Erasmus’ watch while Munster were beaten in the Pro 12 final last year‚ while also winning that competition’s coach of the year award in 2017.

The Bulls face a possible backline problem when they take on bitter rivals Lions in the highly anticipated Super Rugby derby clash at Loftus on ...
Sport
3 years ago

A new Springbok era under coach Rassie Erasmus will not start against England at Ellis Park on June 9 as expected‚ but a week earlier against Wales ...
Sport
3 years ago