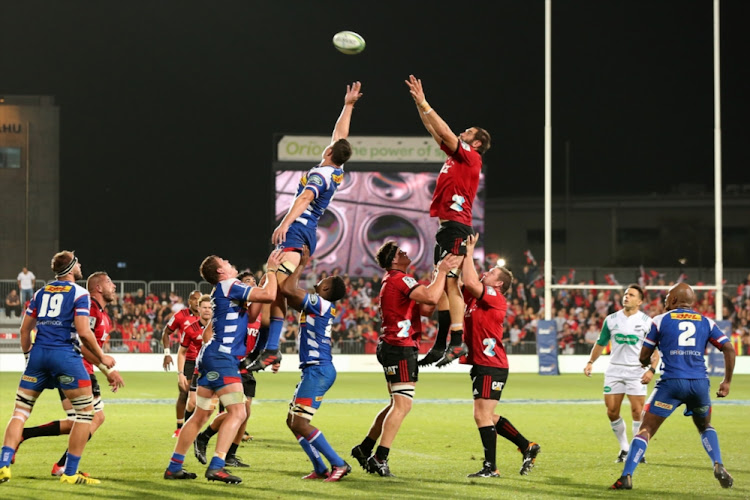 Lineout action during the round two Super Rugby match between the Crusaders and the Stormers at AMI Stadium on March 3, 2018 in Christchurch, New Zealand.
Image: Martin Hunter/Getty Images

An error-strewn first quarter gifted the Crusaders four tries and an unassailable lead as they beat the Stormers for an 11th consecutive time at home.

The Stormers lost lineouts‚ missed tackles and were beaten at the breakdown‚ as the home side eventually scored seven tries to win 45-28 after running into a 26-0 lead in 19 minutes.

It was the Stormers’ second defeat on tour after losing to the Waratahs in Sydney last week and they also appear to have lost lock Pieter-Steph du Toit for their final tour match against the Highlanders next week. He was stretchered off on halftime after being knocked out cold when in possession deep inside Crusaders territory.

In a rare occurrence two of the Stormers’ remaining three tries were also scored by props with Wilco Louw and replacement Steven Kitshoff barging over from close. Lock JD Schickerling scored the other.

Had the Stormers made a better start‚ it could have been a different match because for 60 minutes they gave as good as they received. But overcoming a 26-point deficit against the defending champions was an impossible task.

Sloppiness cost the Stormers early momentum and from then on there was no way back. They failed to control possession and from turnovers the home side made them pay.

The first lineout of the game – an attacking set piece in the Crusaders’ 22-metre line – went astray when hooker Ramone Samuels failed to connect with his jumpers. From the turnover the Crusaders controlled possession and territory for the next five minutes before Bridge opened the scoring.

Fleck wants officials to clamp down on Crusaders’ offside play

Stormers coach Robbie Fleck has demanded that officials for Saturday’s Super Rugby encounter against the Crusaders be especially stringent on the ...
Sport
3 years ago

The Crusaders also exposed the Stormers’ wide defence where wings Seabelo Senatla and Raymond Rhule were exposed positionally‚ as well as in contact.

On the positive side of the ledger for the Stormers‚ the scrum was again excellent while the loose play of flank Cobus Wiese and the danger posed by centre Damian de Allende were impressive.

But it came down to the Crusaders’ ruthlessness in punishing Stormers’ errors and making the most of the chances they created.