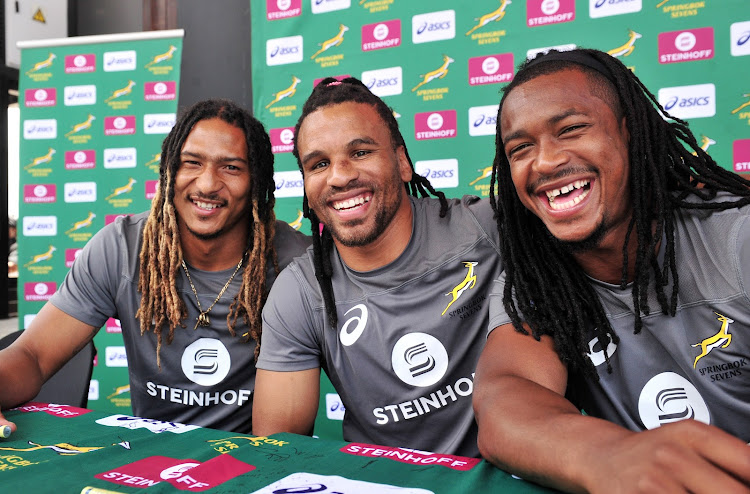 The Blitzboks will take a unique approach to two of their biggest tournaments of the season by splitting the squad for the next round of the World Sevens Series and for the Commonwealth Games.

Hong Kong‚ the most sought after title on the annual World Series‚ is the next tournament on the schedule but it comes a week before the Commonwealth Games in the Gold Coast‚ Australia.

The Blitzboks have never won in Hong Kong and breaking their duck will be tougher considering the squad will be staffed by inexperienced players.

But in a season that also includes the Sevens World Cup in July‚ sacrifices have had to be made.

A slew of injuries have thinned the squad considerably and as a result the original plan to include some heavyweights for Hong Kong has been re-evaluated.

SA Rugby Sevens Academy coach Marius Schoeman‚ will take charge in Asia with a number of uncapped players earning an opportunity to represent the Blitzboks for the first time in Hong Kong.

Powell will remain in SA and prepare the squad that will travel to the Gold Coast as part of Team South Africa.

Powell will be able to count on players such as Justin Geduld‚ Werner Kok‚ Rosko Specman and Ruhan Nel in the bid to retain Commonwealth Gold‚ as they are all in the final phase of recovering from injury.

The team will though be without Kwagga Smith (Super Rugby) and Seabelo Senatla (injured) for the Australian trip.

"We looked at the schedule and the demands and decided to go for this approach‚” said Powell.

“It was not feasible for us to have the same squad playing at both events‚ as we had too many injuries to leading players and need more time for them to be integrated back into the squad.

“One of our objectives was to broaden our base of talented youngsters by giving them playing time on the circuit and this is just such an opportunity.

"I was very pleased with the way a number of youngsters performed in Vancouver‚ so this is another chance for them to gain experience and establish themselves."

The Blitzboks will face South Korea‚ Scotland and England in Pool C in Hong Kong.

Schoeman will name his team to travel to the Cathay Pacific/HSBC Hong Kong Sevens on March 29.

Despite a third place finish in Vancouver on Sunday – the sixth legs of the 2017/18 HSBC World Sevens Series – the Blitzboks are still clinging to ...
Sport
4 years ago

The Blitzboks achieved their objective of emerging from a difficult Pool to secure a Cup quarterfinal berth at the HSBC World Sevens Series ...
Sport
4 years ago

The Blitzboks are hoping it’s third time lucky in Vancouver for the sixth leg of the 2017/18 HSBC World Series‚ which kicks off on Saturday.
Sport
4 years ago

Blitzboks in tough pool in Vancouver

It’s seldom the case that the top two teams on the HSBC World Sevens Series are paired in the same Pool‚ but that is precisely the situation in ...
Sport
4 years ago