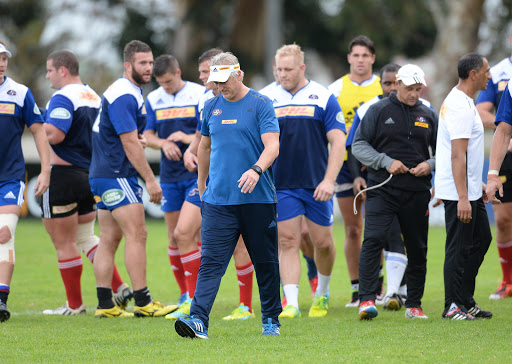 Talk of what the Springbok side may look like in June may be irresistible at this time of year‚ but Stormers coach Robbie Fleck cautioned that it may prove counter-productive in certain cases.

The precocious gifts of Stormers flyhalf Damian Willemse has been a keen topic of conversation south of the Hex River Pass‚ but Fleck reckons the hype needs a lid.

Willemse underwhelmed against the Bulls while watching opposite number Handre Pollard deliver a composed and mature performance in helping his team to a 33-23 Super Rugby derby victory on Saturday.

“We have to look after this kid. There is no doubt about his talent. He is a wonderfully talented player. He is going to play many a game for the Stormers and I would like to think the Springboks. We need to chill about the hype around him.

“We just need to give him confidence and look after him. Get his game management right. There is no doubt what he can do. We just need to put on the brakes on the expectations on such a young kid. He’s a special player. South African rugby needs to look after him‚ so does the media to be fair in terms of the expectations placed on this young kid.”

Pollard however‚ wasn’t the only established Springbok to shine at Loftus‚ Stormers inside centre Damian de Allende showed some of the touches that drew former Bok coach Heyneke Meyer’s attentions in 2014.

Fleck spoke of the resolve the muscular centre showed after an indifferent season last year.

“He had a troubled year last year and worked incredibly hard in the off season. He is in the best shape of his life. He plays like we all know he can. He is really on form at the moment and it really is keeping us ahead in some games and keeping us in touch in others.”

The Bulls’ Jesse Kriel again built on the solid performances he produced early this season but it was a Springbok that has retired from Test rugby that stole the limelight at Loftus.

On the occasion of setting a new South African record for Super Rugby appearances former Bok skipper Adriaan Strauss popped up in all the right places.

“It was terrific that he was able to start on his 149th Super Rugby game. He is just a great example to a lot of young guys. He is well respected. He has waited his opportunity. Not at any point has he complained. He has just kept working. He has been educational in terms of mentoring some of the young forwards.”

“I’m so pleased for him that we got a win. Not often do players who celebrate milestones get the value of a win‚” said Mitchell.