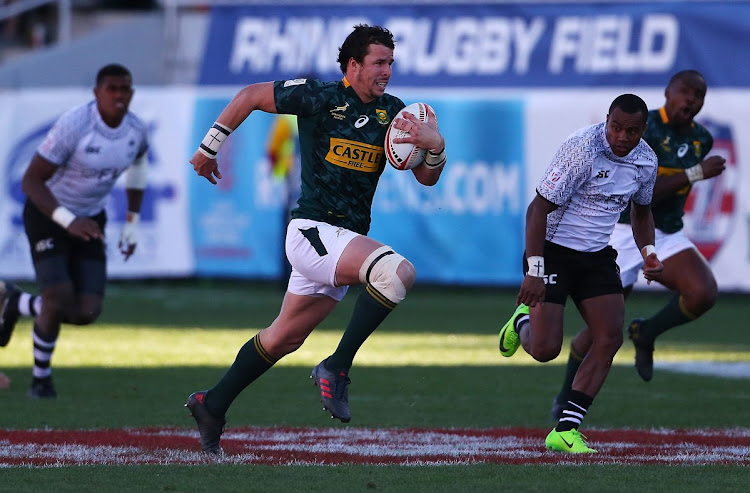 Ruhan Nel of South Africa in action for the Blitzboks.
Image: Springbok Sevens via Twitter

Fiji coach Gareth Barber can smell blood in the water as his side look to close the gap on South Africa‚ and even overhaul them‚ at the top of the 2017-18 HSBC World Sevens Series round seven in Hong Kong this weekend.

South Africa have opted to take an inexperienced team to Hong Kong with five debutants and no players with more than 10 World Series appearances in the squad‚ while their stars are wrapped in cotton wool for next week’s Commonwealth Games.

The Blitzboks coach Neil Powell says this has been part of the planning‚ but it’s a high-risk strategy‚ especially as Fiji have picked their strongest team for Hong Kong.

The same players will represent the Pacific Islanders at the Commonwealth Games on the Gold Coast next week.

Why SA didn’t take the same approach has not been fully explained‚ especially as Hong Kong and the Gold Coast are virtually in the same time zone.

Back-to-back tournaments are a regular occurrence on the World Series and these two events could have been treated in the same way.

Barber‚ whose Fijian team has great sevens depth‚ sees Hong Kong as a perfect chance to cut SA’s eight-point lead at the top of the standings this weekend.

“For the Fijians this (Hong Kong) is one of the biggest tournaments that exists‚” Barber said.

“I’ve selected a squad to go and win both Hong Kong and the Commonwealth Games and we’re ready to compete at the highest level.”

The Blitzboks have nothing to lose‚ though‚ as there are no expectations this weekend.

If a bunch of rookies can win the one tournament on the series stage where victory has eluded SA for over 20 years‚ then it would be the greatest performance in SA Sevens history.

Members of the squad have been making all the right noises in the buildup to Hong Kong and while just qualifying for the quarterfinals would be an achievement‚ it is an opportunity for some players to stake a claim for the future.

One of the new faces in the squad is Standerton-raised Mfundo Ndhlovu‚ who will be playing on the wing‚ a position Seabelo Senatla made his own in the past.

“It is a massive honour to be wearing Seabelo’s jersey‚ but it is also a big responsibility‚” said Ndhlovu.

“I take that on knowing that my teammates will back me‚ just as I back them to do the right thing.”

Ndhlovu‚ who won gold with South Africa’s Under-18 team at the Youth Commonwealth Games in 2015‚ is excited about the opportunity to represent his country at senior international level in Sevens – a code that he loves to play.

“This is going to be huge for all of us‚” he said. “I can’t wait‚ and I know the rest of the squad feels the same.”

The Blitzboks are drawn in Pool C and will face England‚ Scotland and South Korea.

Subjecting themselves to prolonged bouts of introspection doesn’t seem to form part of the Lions’ road to redemption.
Sport
4 years ago

Australia outside back Israel Folau has sparked outrage with a comment on social media suggesting that gay people would be condemned to “hell” unless ...
Sport
4 years ago

Injured Lions wings Aphiwe Dyantyi and Ruan Combrinck‚ as well as Stormers flyhalf Damian Willemse form part of a group of players invited to the ...
Sport
4 years ago