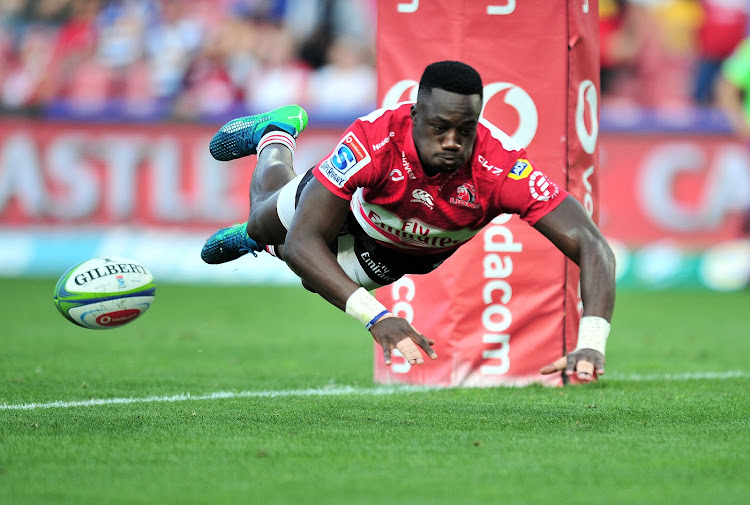 Madosh Tambwe of the Emirates Lions scores a try during Super Rugby local derby match against the Stomers at the Ellis Park Stadium, Johannesburg on 07 April 2018.
Image: Samuel Shivambu/BackpagePix

The Lions’ Super Rugby campaign roared back to life against a shell shocked Stormers here on Saturday.

They stretched their unbeaten run in derby matches to 20 with a performance of fist thumping authority that will go some way to banish the memory of their poor results over the last month.

The Lions rumbled with intent from the get-go as Kinshasa born winger Madosh Tambwe made a name for himself by completing a hat trick of tries inside the first 13 minutes.

Tambwe scored a fourth try in the second half when the grabbed the ball from the otherwise impeccable Damian Willemse’s grasp.

That he scored those tries in four distinctly different ways says much about the 20-year-old’s potential.

He joins an illustrious list of 15 others including Joe Roff, Joeli Vidiri, Doug Howlett, Mils Muliaina, Caleb Ralph and Sitiveni Sivivatu who all share the record for that number of touchdowns.

His injured teammate Courtnall Skosan joined that list last season and it is worth noting that Tambwe is only in the team because of that injury, as well as the one that is keeping the super charged Aphiwe Dyantyi on the sidelines.

When Tambwe tried to leave the field in the 54th minute he was momentarily sent back before he soon limped off, to a standing ovation.

It was richly deserved.

His electrifying run in the first minute after he collected a Willemse chip well inside his own half had the crowd in raptures.

He spatchcocked the Stormers defence and just kept on going. It was the angle of his attack and his sheer speed rather than the number of defenders he beat, that made the try.

It was as a collective however that the Lions put the Stormers to the sword.

The influence of captain Franco Mostert was increasingly felt, while returning Bok wing Ruan Combrinck cut a reassuring presence in the back three.

Elton Jantjies displayed some deft touches, while Kwagga Smith was a familiar picture of industry.

The Stormers were desperately poor and their evening was perhaps encapsulated in Raymond Rhule’s knock on with the tryline beckoning after the full-time siren had sounded.

Ruck penalties cost the Stormers, particularly when they still chased the game in the first half.

It also arrived inconveniently when they had played themselves into positions of promise.

It was also an opening half in which the Stormers’ vaunted scrum couldn’t banish the knock in reputational damage they took at Loftus last week.

Last week Stormers coach Robbie Fleck lamented the debilitating effects of playing seven matches in a row and it showed here too.​

A late penalty try handed the Waikato Chiefs a fifth victory in six Super Rugby matches this year and extended their record-breaking dominance over ...
Sport
4 years ago

The Blitzboks started their Hong Kong Sevens tournament on a strong note on Friday as they defeated South Korea 45-0 in their opening pool C match.
Sport
4 years ago

Reelected SA Rugby president Mark Alexander has promised a turnaround to Springbok rugby fortunes that will serve as a springboard for a boost for ...
Sport
4 years ago

Mark Alexander was reelected as president of SA Rugby for another four years at the organisation’s annual general meeting in Newlands on Friday.
Sport
4 years ago