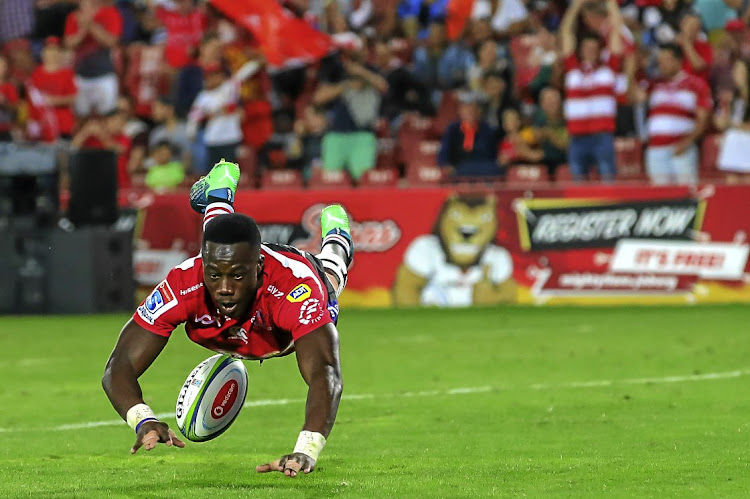 Madosh Tambwe of the Lions scores his fourth try during the Super Rugby match against the Stormers at Emirates Airline Park in Johannesburg.
Image: Gordon Gallo Images

Coach Swys de Bruin scoffed at suggestions that the Lions had become a Jekyll and Hyde side this season.

The Lions had lost three of their last four matches before they thumped the Stormers 52-31 in their Super Rugby clash at Ellis Park on Saturday.

De Bruin was quick to remind his team had been an attacking force all season.

“They’ve been there. We’ve now scored 43 tries this season. We are averaging more than five a game‚” said the coach.

The turnaround he suggested‚ was due to the increased influence of defence coach Joey Mongalo.

“I want to complement our defence coach for the step up he has made. The defence was unreal. I think he has a great future ahead of him. Hats off to him.”

De Bruin described the performance as complete but added: “I don’t want to get carried away. This is a long competition.”

The Lions’ Super Rugby campaign roared back to life against a shell shocked Stormers here on Saturday.
Sport
4 years ago

Stormers to regroup and recoup after Lions thrashing

Stormers coach Robbie Fleck fingered his team’s defence and breakdown as areas that need urgent intervention before they tackle the next phase of the ...
Sport
4 years ago

After their bye this week his team faces a searching examination in their tour matches against the Waratahs‚ the Reds‚ the Hurricanes and the Highlanders.

“We are looking forward to the tour. The players are naughty but like in a good way. We enjoy touring‚” said De Bruin.

The Lions‚ he hopes‚ will be bolstered by the return of several injured players during the tour. Flank Cyle Brink was the latest casualty but he was removed from the action against the Stormers with only a pinched nerve.

“Taking him off was just a precaution but Marnus (Schoeman) did so well when he came on because he was a real irritation for them.

“We will make a call with the medics on Monday. Hopefully Ross (Cronje) will be back as well as Warren (Whiteley). Even Aphiwe (Dyantyi) and Trokkie (Rohan Janse van Rensburg) may be back. You never know with these injuries.”

The Lions have a bye this week before travelling to Sydney next Tuesday.