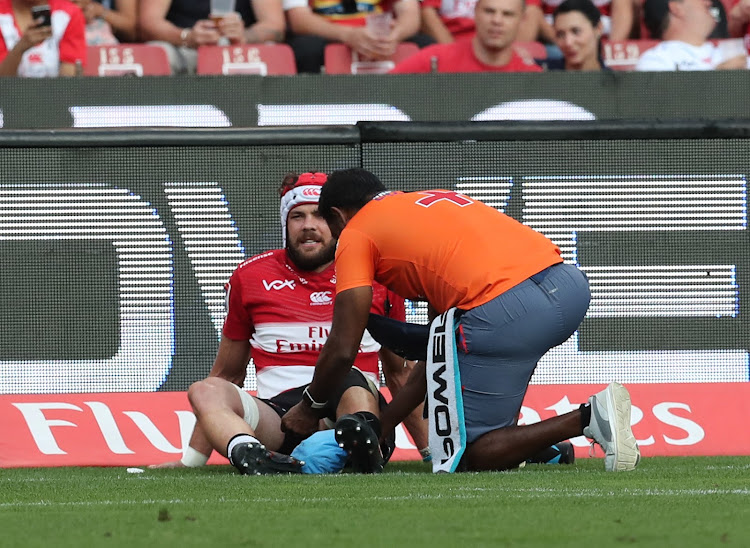 The Emirates Lions captain Warren Whiteley being treated on the field after sustaining an injury during the Super Rugby match against the Blues at Ellis Park, Johannesburg on 10 March 2018.
Image: Gavin Barker/BackpagePix

The Lions expect to embark on their four-match Australasian tour next week with their injured stars almost all restored to fitness.

Regular captain Warren Whiteley (knee)‚ who was injured halfway through their defeat at the hands of the Blues at Ellis Park in round four‚ will be the most significant returnee from injury.

His leadership has been sorely missed with the Lions losing to the Blues‚ the Jaguares and the Crusaders in his time off the field.

His calm‚ calculated demeanour was conspicuous by its absence in that period but it remains to be seen whether he will be eased back in off the bench.

Hacjivah Dayimani has deputised well for him at No8 in the last two matches.

Scrumhalf Ross Cronje (rib)‚ wing Aphiwe Dyantyi (pectoral muscle) and centre Rohan Janse van Rensburg (upper leg haematoma) are also expected to be cleared for the tour but it is still uncertain when exactly they will return to the playing surface.

Either way‚ the return of the quartet will be a significant boost to the Lions.

Last weekend's walking wounded should be available for the Lions' first match on tour.

Flank Cyle Brink has a nerve entrapment in his right shoulder but should be available for selection when the Lions play the Waratahs in Sydney on Friday. The same applies to scrumhalf Dillon Smit who injured rib cartilage.

Four-try hero against the Stormers‚ Madosh Tambwe is also expected to be fit after he left the field in the 54th minute last weekend.

The Lions will need all hands on deck in what is likely to be a testing tour.

They lost ground on home soil with defeat to the Blues and the Crusaders and will eye at least as many wins on the road.

They play the Waratahs in Sydney‚ the Reds in Brisbane‚ the Hurricanes in Wellington‚ before concluding their tour with a clash against the Highlanders in Dunedin. ​

A week is a long time in rugby but according to veteran Springboks and Sharks prop Tendai “Beast” Mtawarira‚ that length of time after an ...
Sport
4 years ago

Blitzbok coach Neil Powell admitted that the ‘second string’ squad that did duty in Hong Kong over the past weekend has given him a selection ...
Sport
4 years ago