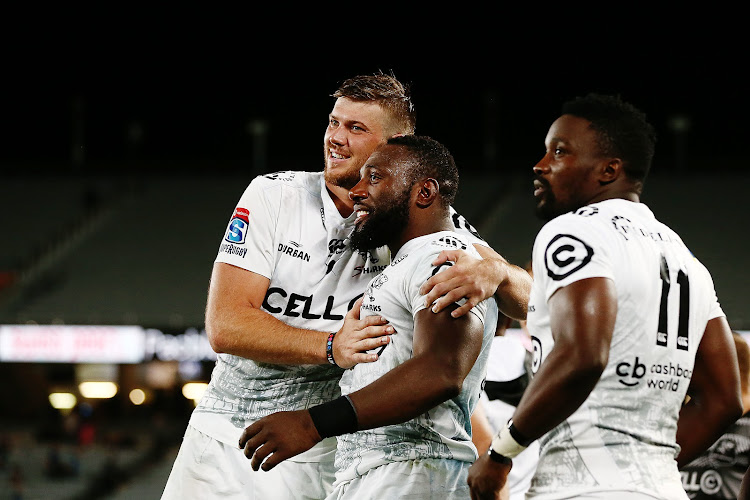 Tendai Mtawarira (C) of the Sharks celebrates victory with his teammates after defeating the Blues in a Super Rugby match at Eden Park, Auckland, New Zealand on March 31 2018.
Image: Anthony Au-Yeung / www.photosport.nz

A week is a long time in rugby but according to veteran Springboks and Sharks prop Tendai “Beast” Mtawarira‚ that length of time after an embarrassing Friday night in Melbourne may have changed their fortunes.

The week in question was after the feeble 46-14 loss to the Melbourne Rebels on March 23‚ where a listless and disinterested Sharks unit looked to be on the verge of implosion.

The week before‚ they spat the dummy against a weak Brumbies side in Canberra.

While their 63-40 win against the Blues was a case of the Sharks marrying power and precision to milk penalties and tries off an ill-disciplined foe‚ they went the full 12 rounds against the Hurricanes.

Last week's 38-37 loss was not only a fair reflection of how close the Sharks to recording a second consecutive win in New Zealand but the strides they've made since that night in Melbourne.

Being one of the senior members‚ Mtawarira said it was incumbent on them to turn the team around and salvage what remains of their season.

“We just made a collective decision that we want to keep the ball in hand‚" Mtawarira said.

"In Australia‚ we allowed the teams‚ especially the Rebels‚ to keep the ball.

"We had to defend the whole time and you can't play rugby that way. You can only play decent rugby by keeping the ball and that's where we changed the mindset.

“We started focussing a lot more on ball retention and in the game against the Blues‚ we really kept the ball well and we showed that we could finish.

"It was a decision we made as a team and we'd love to remain on this path.”

The Sharks have a run of three consecutive home games but they have the Bulls first up next in what will be the Sharks' first home Super Rugby derby of the season.

John Mitchell's Bulls are fresh off a bye and a 33-23 win against the Stormers but will be looking for their first win outside Loftus this season.

The Sharks were a patchy outfit at home before their travels but they're a different unit now even though they tend to revert to their turgid type.

With the Bulls and the Stormers still struggling to find a semblance of consistency‚ Mtawarira said they have an opportunity to get on a home roll before their next visit to Loftus Versfeld on May 12.

“We've played two New Zealand sides in the past two weeks so we know what to expect from the Bulls.

"They've been playing that kind of game and there's a lot of similarity between the Bulls and the New Zealand sides in terms of how they approach the set-pieces.”

“We want to put in massive performances in front of our home crowd because it's a privilege to play in front of them in the Shark Tank.”

Coach Swys de Bruin scoffed at suggestions that the Lions had become a Jekyll and Hyde side this season.
Sport
4 years ago

Sharks snatch defeat from jaws of victory against Hurricanes

The Sharks snatched defeat from the jaws of a deserved victory when Ngani Laumape’s late try saw the Hurricanes win a game they had no business doing ...
Sport
4 years ago