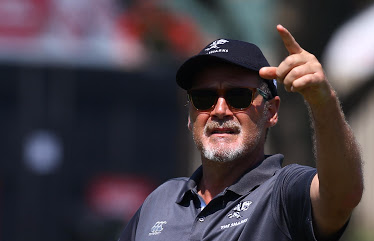 Sharks coach Robert du Preez lambasted his side for what he termed a “lack of effort” in their 40-10 humbling at the hands of the Bulls at King’s Park on Saturday.

Du Preez said the defeat was an “embarrassment”.

“After you’ve played two really good games in New Zealand (where) the team showed how talented it is you come back and have an absolute embarrassment at home.

"That is what it is‚ an embarrassment. I think a complete lack of effort‚” Du Preez bristled.

They were blown away in the opening minutes as the Bulls ran in three tries.

“We spoke about the Bulls scoring points in the first 20 minutes of every single game.

"That’s been a trend through Super Rugby. That really put us on the back foot and we could never really recover from that.

“There was time to pull the game back. However‚ you have to fight for every minte and we didn’t do that. There was no effort.”

The golden sunset the Blitzboks were supposed to give Team South Africa on the final day of the Commonwealth Games on Sunday first turned bronze and ...
Sport
4 years ago

It says much of the evolution of the Bulls that they ruthlessly dismantled the Sharks on their home patch in conditions that ought to have favoured ...
Sport
4 years ago

The visitors came off a bye after their win over the Stormers‚ while the Sharks had just returned from their taxing four-week tour of Australasia.

“When teams come back from overseas it is a hard week‚” noted Bulls coach John Mitchell.

“We experienced it before the Stormers. We weren’t too flash but we gutsed it out. We dug in.”

“It is difficult to say. Our practices during the week was good. It’s tough coming back from the tour. Nothing went right (in the game).”

As scathing as he was of his player’s performance it is unlikely that Du Preez can make radical change to his squad for next week’s clash against the Stormers in Durban.

“These are the same guys who played last week‚” said the coach. “That’s inconsistency. Playing well and then coming back and deliver a disappointing performance like this.”

“We have to take this loss on the chin and move on and fix it next week.”

The defeat would have hit home for the coach.

The match was supposed to mark the ground breaking achievement of three brothers playing for the same Super Rugby team in South Africa. Du Preez and his sons however were left to reflect among the thoroughly vanquished.