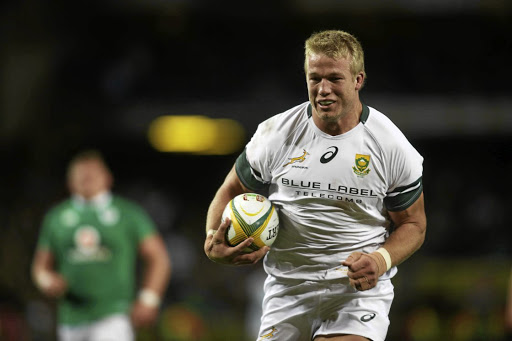 Stormers lock/flank Pieter Steph du Toit is not a man of many words‚ but as one of the team’s leaders‚ he admitted that it was time for battling Cape side to ‘pull up their socks.’

The Stormers have lost five of their opening eight games – all away from home – and face another road trip against the Sharks this weekend.

It’s been a merciless schedule for the Stormers and winning their first away match of the season would be a boost before a run of five home games.

Du Toit is one of the few Stormers players who have consistently excelled during the campaign‚ despite being asked to play flank on occasion. But it’s the overall team performances that concern to giant Springbok.

“We have had a few hard words with each other because we realise where we are on the log‚” Du Toit said.

“It wasn’t what we expected at the start of the season‚ the guys need to understand that we’re not in a good place and it’s time to pull up our socks.

“But there is also no use trying to find fault with everything and turning on one another. We have to find solutions to our weaknesses and then hopefully‚ it will go much better this weekend.

“Obviously teams need confidence and we do feel like we’re under the pump at the moment.

“But we do have a lot of home games coming up and that is a positive that we can draw on.

“It’s never easy when the side loses regardless of your own personal performances. I still believe there are some areas of my game I can improve.”

The Stormers trail the Sharks by one point on the standings and are still poised to make a play-off run with so many home games in the coming months. But this weekend’s clash is shaping up as a crunch encounter for both teams.

Sharks coach Robert du Preez lambasted his side after their 40-10 home loss against the Bulls last weekend‚ and there is sure to be a reaction this Saturday.

“The Sharks have a passionate coach‚ you can see it in his reactions in the coach’s box and I’m sure he would have had a lot of hard words for his team after last weekend‚” Du Toit said.

“Both teams are in the same situation – our backs are to the wall and it’s a must-win game for both of us.”

Du Toit is likely to start at flank again this weekend with Cobus Wiese still not fully fit.

“I don’t find it difficult to switch positions during the game and I play similarly in open play regardless‚” he said.

“If I have enough time to prepare to play flank and work on aspects of the game then it goes well. But if you have to make a switch late in the week‚ then it can be a little problematic due to lack of preparation.”