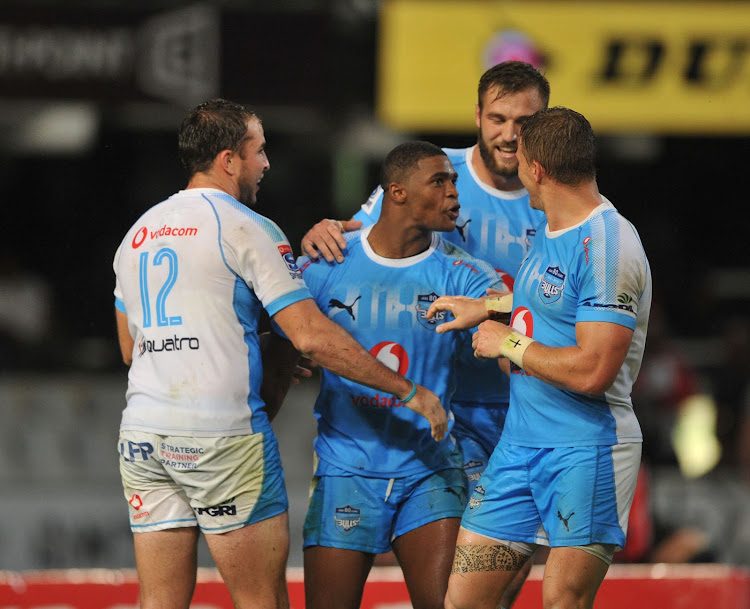 Warrick Gelant of Bulls helped himself to a hat-trick of tries during the Super Rugby match against the Sharks at Kings Park Stadium, Durban, on Saturday April 14 2018.
Image: Sydney Mahlangu/BackpagePix

It took a simple change of midset and back to basics discussions with Bulls coach John Mitchell to turn around Warrick Gelant’s campaign in Super Rugby this season.

The Bulls full-back overcome a knee injury that delayed his start to the season and had talks with coach Mitchell that helped him cut deficiencies that were affecting his game.

He is one of the favourites to start for the Springboks in the June Tests against Wales and England.

During last weekend’s Bulls’ 40-10 demolition of the Sharks in Durban‚ Gelant impressed in the defence.

He was excellent in positional play‚ looked assured with both legs and topped his shift with a hat-trick of tries on difficult wet weather conditions.

"It was a battle for me to come through and make my presence felt in the team but it’s an ongoing process.

"We took a step back‚ relaxed a little bit‚ focused more on the basics and fortunately I found myself in the right time and the right place against the Sharks last weekend.

"It was great to score tries because they boosted my confidence‚” he said‚ adding that returning to the Boks is not a priority at the moment.

“I have been struggling with form.

"It is just great to be back and helping the team.

"National call-ups and stuff like that will sort themselves out.

"It was a nice feeling for me to score and contribute to the team last weekend.”

The Bulls’ impressive win over the Sharks has seen them move to second place on the South African log standings and Gelant says they are in the building phase.

“We are in the building phase‚" he said.

"We have standards that we have set ourselves and we want to match them every weekend.

"It is not about us wanting to win the championship in one or two year’s time‚ it is for us to get better every day and every match.

"This weekend we are up against the Rebels who are sixth on the log but it is a challenge that excites us to compete against top teams.”

Lions captain Warren Whiteley’s return from injury is back on ice after he felt a ‘click’ in his troublesome knee.
Sport
3 years ago

The Stormers are struggling and Western Province Rugby is on shaky financial ground‚ but the University of Stellenbosch (Maties) remains a source of ...
Sport
3 years ago

Stormers lock/flank Pieter Steph du Toit is not a man of many words‚ but as one of the team’s leaders‚ he admitted that it was time for battling Cape ...
Sport
3 years ago