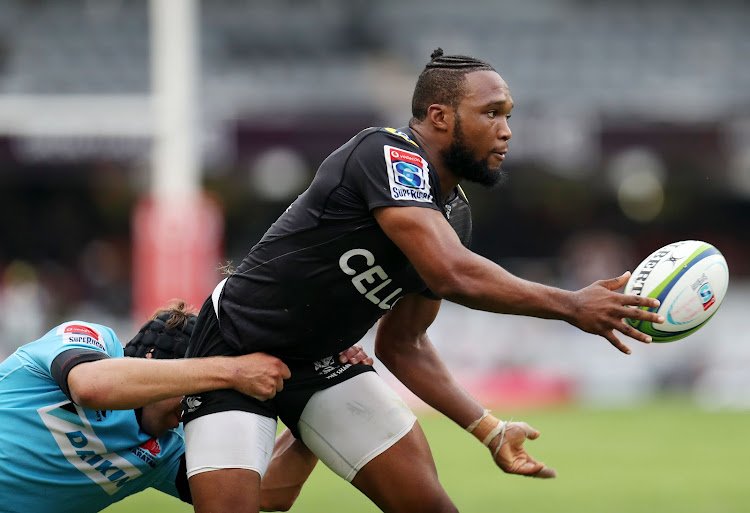 The Cell C Sharks winger Lukhanyo Am says his team is capable of bouncing back and turn their Super Rugby season around with the against the DHL Stormers.
Image: Muzi Ntombela/BackpagePix

In not so many ways‚ it seems the Sharks have to start better in order to get a positive result.

This is something their cracker-jack centre Lukhanyo Am acknowledged.

The Sharks were beaten black and blue by the Bulls at home on Saturday and how quickly the Pretoria side got out of their blocks dictated the path of the game.

The 40-10 losing score-line was indicative of how poor they were and with the Sharks seemingly lacking the stomach for a fight when trailing‚ they never looked like being in the contest after they trailed 14-3 after 10 minutes.

The killer blows were landed early and the Sharks spent the better part of a saturated night trying to get off the canvas.

Am said they needed to start better against an equally struggling Stormers side that was also caught cold very early when they lost to the Bulls two weeks ago.

“We don't want to put pressure on ourselves but we know our standards and we know what we're capable of‚" Am said.

"We do get hard on ourselves when we're not reaching our standards.

"The first 20 minutes also let us down against the Bulls. We were behind and tried to chase the game. We'll try to have a good start.

“We had quite a decent tour and coming back from New Zealand‚ the confidence was quite high but going into the Bulls game‚ things didn't go as planned.

"We didn't adapt to the conditions and that's what the Bulls managed to do very well and that's why they came out on top.”

There's also the matter of adapting quickly to conditions‚ something the Bulls did better than the Sharks but for Robert du Preez's side to get their campaign back on track‚ they need to deliver a better all-round team effort.

Du Preez said a lack of effort was party to their demise on the weekend but Am said they need to look at the Stormers game as a season changer.

The unexpected and heavy defeat against the Bulls has given the Sharks little room to manoeuvre with the Super Rugby season starting to turn towards the pointy end.

“I think the Stormers game could be our season changer.

"We need to regain our confidence again and try to be consistent.

"There are no easy games in the local derbies.

"We need to bring our A-game and do our best‚” Am said.

“It was a very disappointing loss but games like those‚ you have to get over very quickly and focus on the next game.

"This week we've been trying to work on some focus points going into the next game.”

Springbok coach Rassie Erasmus has called up 15 Sharks players to his final ‘alignment’ camp before the June internationals.
Sport
3 years ago

It took a simple change of midset and back to basics discussions with Bulls coach John Mitchell to turn around Warrick Gelant’s campaign in Super ...
Sport
3 years ago

Lions captain Warren Whiteley’s return from injury is back on ice after he felt a ‘click’ in his troublesome knee.
Sport
3 years ago

The Stormers are struggling and Western Province Rugby is on shaky financial ground‚ but the University of Stellenbosch (Maties) remains a source of ...
Sport
3 years ago