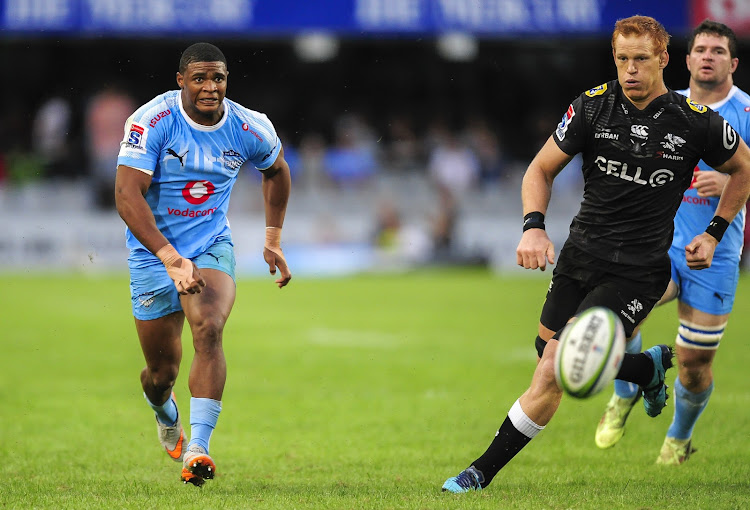 Warrick Gallant (L) of the Vodacom Bulls and Philip van der Walt of the Cell C Sharks (R) chase after the rolling ball during the Super Rugby game at Kings Park in Durban on 14 April 2018.
Image: Gerhard Duraan/BackpagePix

With the Sharks' Super Rugby campaign grinding to an unexpected halt‚ they will need the likes of Philip van der Walt to help resuscitate what remains of their season.

The Sharks shone brightly in two gruelling matches in New Zealand but last week's hammering against the Bulls only served to show how the malaise of inconsistency has firmly settled at the Shark Tank.

The foundation of the 63-40 evisceration of the Blues and the close-run 38-37 loss to the Hurricanes was a solid‚ if not dominant forward platform.

A seemingly resurgent Bulls unit under John Mitchell not only extinguished that flame but deprived it of oxygen to fire again.

The Stormers‚ whom the Sharks face on Saturday‚ have an even better pack even though the coaching resources in Cape Town haven't quite figured out a way to utilise them properly.

Like the Stormers‚ the Sharks go into the game on the back of a heavy defeat and with only two wins in eight games‚ Van der Walt acknowledged they need to start winning and fast.

The only difference is that the Stormers had a week off to reflect on the mauling inflicted on them by the Lions after losing to the Bulls the week before.

“We had good discussions in regards with where we went wrong but we have identified that the games in which we started well was the better approach.

"We had the same plan in mind against the Bulls but their execution was better‚ ” Van der Walt said.

“Every team wants the fast start approach but it boils down to execution and the Bulls executed the first 20 minutes very well.

"We want to do the same but I think it's also important that we prepare well and have tricks up our sleeve to exploit what we feel may be weaknesses.”

Van der Walt was frank in saying they need to front up after their flat showing on Saturday.

The Stormers pack scrummed the Sharks into the Indian Ocean in last year's Currie Cup final and the scrum is pretty much the only thing that works for the Stormers this season.

The Sharks are the better rounded side but can't do anything without their forwards arriving in body and spirit.

“We know what's coming‚ especially after our poor performance against the Bulls pack. We as forwards know we didn't match that up.

"I think the Stormers know with the confidence they have from the Currie Cup final that they can scrum and drive us. We just have to front up and that's an attitude thing‚” Van der Walt said.

“We have to be wary of where we've been in trouble against the Bulls because the Stormers will be looking to exploit that.

"We have to be wary of having soft spots ourselves but we are looking at opportunities but I don't want to give away too much.”

The embattled Stormers have received a boost with the news that Springbok tighthead prop Frans Malherbe is set to make his first appearance of the ...
Sport
3 years ago

In not so many ways‚ it seems the Sharks have to start better in order to get a positive result.
Sport
3 years ago