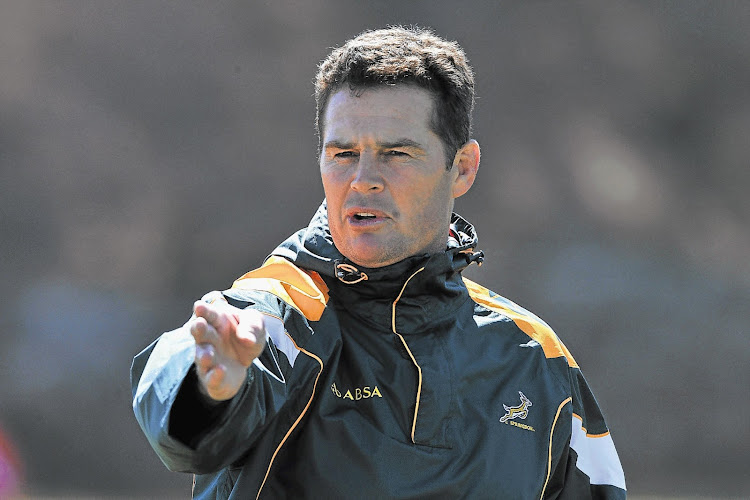 “All these facilities are world-class and will ensure an excellent environment for the Springboks to prepare for all of their matches” said coach Rassie Erasmus.
Image: GALLO IMAGES

Urayasu City‚ Omeazaki City‚ Ichinomiya City and Kobe City will become familiar names to South Africans in the coming months‚ as they are host venues for the Springboks at Rugby World Cup 2019.

World Rugby announced the venues for the participating teams on Friday and Bok coach Rassie Erasmus declared himself happy.

“We carried out an extensive venue and facilities inspection earlier this year at the proposed team camp venues and we are very pleased and satisfied that all our team training and accommodation requirements will be met‚” Erasmus said.

“All these facilities are world-class and will ensure an excellent environment for the Springboks to prepare for all of their matches.”

Every Rugby World Cup 2019 team camp will consist of an outdoor and indoor training venue‚ a swimming pool‚ gym and accommodation and will be utilised by the teams during and in the run-up to the tournament‚ which starts on September 20‚ 2019.

Erasmus also praised the enthusiasm of the city authorities for their engagement and assistance so far.

“The various city/prefecture communities are all very excited to host and welcome us into their surroundings and I believe we will receive fantastic hospitality wherever we stay during the tournament‚” he said.

“Of course‚ the most important thing is to prepare in a professional environment with easy access to all necessary facilities such as training fields and a good gymnasium.

“We saw during our recent visit that this infrastructure is of a very high standard and will assist us to achieve optimum training results.”

World Rugby announced the provisional selection of 52 camps‚ where the participating teams will stay and train. These venues were selected in close consultation with the teams to ensure optimum training environment.

According to World Rugby‚ applications were received by 90 cities and prefectures from across Japan.

Friday’s announcement follows approval by World Rugby of the provisional selection made by the Japan Rugby 2019 organising committee after a rigorous process that has team performance and community legacy at heart.

With just over 500 days to go before the start of the tournament‚ Friday’s announcement represents another major milestone in preparation for Asia’s first Rugby World Cup.

The formal appointment of these cities/prefectures as team camp hosts will be finalised upon the conclusion of an official agreement between the city or prefecture and the organising committee‚ while the team camps for the knock-out phases will be announced in due course.