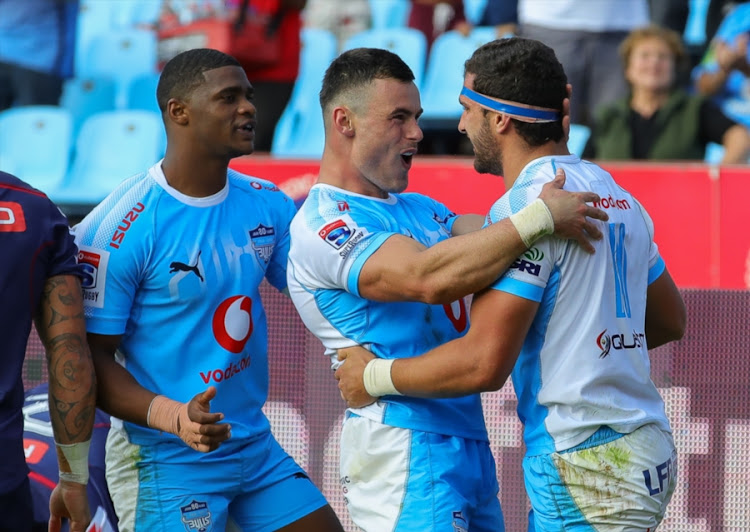 Jesse Kriel of the Vodacom Bulls congratulates Divan Rossouw after scoring his try during the Super Rugby match against the Rebels at Loftus Versfeld on April 21, 2018 in Pretoria, South Africa.
Image: Gordon Arons/Gallo Images

The Bulls managed to beat the Rebels 28-10 during their largely uninspiring Super Rugby encounter in Pretoria on Saturday afternoon but they made a potentially easy task look perilous.

Clearly the dominant side in the first half where they scored three unanswered tries through Adriaan Strauss, Jesse Kriel and Divan Rossouw, they returned from the break and nearly gave the Australians a sniff.

Bulls will have a point to put some blame on out of sorts New Zealand referee Ben O'Keeffe, who made a number of questionable decisions, but they were largely ill disciplined and coach John Mitchell will demand a better showing on Saturday when they confront the Highlanders.

Mitchell will not be happy with the fact that the Bulls only managed to score one try in the closing stages of the match after they were put under pressure by the Rebels who could possibly have won this game if they were superior.

To their credit, the Bulls have now won their last three matches following important victories over the Stormers, the Sharks and now the Rebels and they remain second on the South African Conference standings with 19 points from eight matches.

For the Rebels, it is back to the proverbial drawing board as this was their third loss on the spin after defeats to the Hurricanes and the Jaguares at home and they must improve their performance when they visit the Stormers in Cape Town on Friday.

Former Springboks captain Strauss opened the scoring after six minutes for Handre Pollard to convert and Rebels flyhalf Jack Debreczeni followed up shortly with two missed penalties in quick succession which could have given his side momentum.

Bulls continued to commit elementary mistakes in their own half, this time Thembelani Bholi was penalised for hands in the ruck and Debreczeni finally found the middle of the poles with his kick as the Rebels got on the scoreboard.

Bulls second try was scored by Springboks utility back Kriel with Pollard converting after 23 minutes and the third came after the half time hooter sounded from Rossouw after a good scrum to take a 21-3 lead to the break.

Rebels came back from the break stronger and they were rewarded after five minutes with their only try through Micheal Ruru with Debreczeni adding the conversion but Bulls put matters beyond doubt through substitute Andre Warner seven minutes from time.