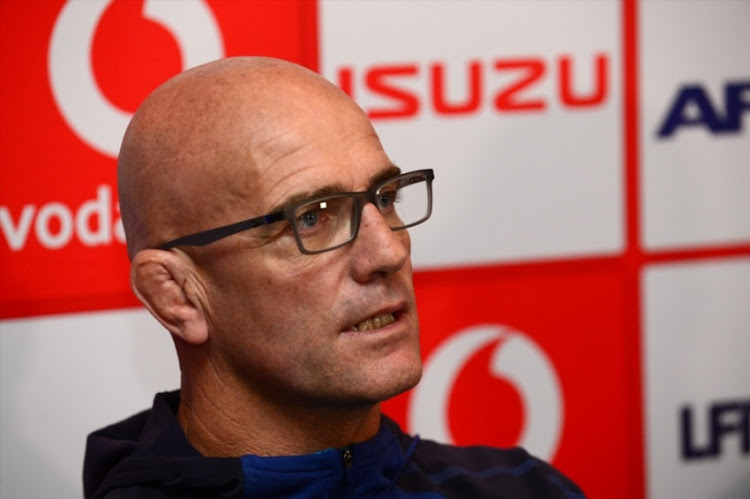 Bulls coach John Mitchell was not entirely satisfied with his side's overall performance after their 28-10 Super Rugby win over the Rebels at Loftus on Saturday.

But he took comfort from the fact that the victory was achieved with a bonus point.

After a good first half performance where they scored three unanswered tries from veteran Adriaan Strauss‚ Jesse Kriel and Divan Rossouw‚ the Bulls were frustrated by the Australians who resorted to slowing the game down at crucial phases.

#Bulls coach John Mitchell talks about their #SuperRugby win over the Rebels. pic.twitter.com/XHBxKTeK9r

“The overall performance wasn’t superb from our side but‚ having said that‚ we managed to create enough opportunities especially in the first half‚” Mitchell said.

“The guys must be commended for the manner in which they managed to deal with the opposition’s ploy of slowing the game down.

"We will take the five points‚ which were achieved in a difficult way and commend the guys because they never allowed the frustration get to them.

"We put some good lines and speed at them‚ we were terrific in the tackle but some weeks you get it right and some you don’t.”

Asked on their tactics on Saturday‚ Rebels coach Dave Wessels‚ who was born in Cape Town‚ said they play the game to their strengths to try and get an advantage over the opposition.

“Our job is not to come here and entertain the Loftus crowd‚ it is to win for the people of Melbourne‚" he said.

"For me we are a team that is learning and hoping to get better with time. The big learning after this match was the improvement we showed in certain areas but we need to keep on working."

Mitchell had something good to say to his defence as they conceded only one try in the second half and 10 points overall on the day to stretch their unbeaten run to three matches following victories over the Stormers and the Sharks.

“We enjoy the transitional effect that comes from our defence but clearly we did not convert enough from the way we created‚" he said.

"We gave away some offside line penalties but we will look at that this week because we take pride in our defence.

"It s the score-line which determines how the game was won and it is the defence that was of the highest caliber on the day."

The Bulls welcome the Highlanders on Saturday and Mitchell is expecting a tough battle against the New Zealanders who have lost only once after seven matches.

“I can guarantee our fans that next week is going to be hectic because the Highlanders like friction‚ they just edge you the whole time‚" he said.

"It is going to be a different match to this one and we must be prepared.

"We are at home‚ we have loaded the players well in terms of training over the last three weeks and we will look to be sharp this week. Guys have been outstanding in the way they went on about their preparations.”