Bon voyage Bryan Habana and thank you for the memories 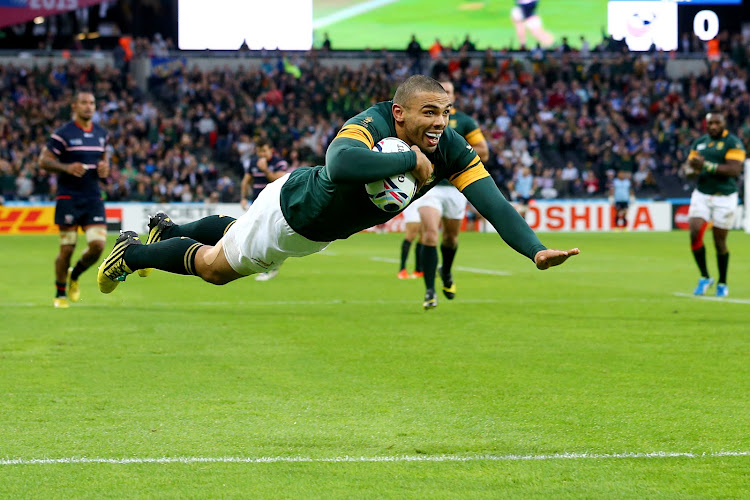 Bryan Habana had the speed and skill to evade trouble and wreak havoc on a rugby field‚ but ultimately he couldn’t outpace age and injuries‚ which forced him to call time on his career on Tuesday.

Habana‚ 34‚ announced that when the current French domestic season ends in June‚ he would retire from all rugby.

The KES boy who fell in love with rugby as a spectator at the 1995 Rugby World Cup final would eventually make his own mark on the tournament and become South Africa’s greatest wing.

"The inevitable moment has come knocking on my door and I've welcomed it in for a drink‚” Habana posted on social media.

"It's been more than a year of hoping‚ trying‚ pushing and willing to get back on the field for one last time‚ to taste the sweet victory or encounter that gut-wrenching despair.

"To hear the roar of the crowd or grab the pill out of the air. To make that last bone crunching tackle or score that last game-winning try.

"But it's unfortunately just not to be. I‚ like most‚ would have liked my career to have ended differently‚ but sometimes things don't turn out quite the way we hope for."

Habana started rugby life as a scrumhalf before making it into the pro ranks as a centre for the Lions.

He was selected as a centre for the SA Under-21 team in Scotland in 2004‚ but was moved to wing for their third Pool game against New Zealand.

Later that season‚ Jake White‚ Bok coach at the time‚ picked Habana from nowhere to be part of a Bok training squad for the Tri-Nations.

A few months later Habana was capped for the first time against England at Twickenham.

He came off the bench and scored a scorching try to announce his arrival on the world stage. Another 66 Test tries and 123 caps would follow.

For the past two years Habana has struggled to remain a first choice player at club Toulon while he also never gave up hope at one more tilt at playing for his beloved Springboks again.

Habana played the last of his 124 Tests on a fateful November‚ 2016 day in Florence‚ when the Boks lost to Italy for the first time.

Typically‚ in what would be his last outing in green and gold‚ Habana scored his 67th and final Test try. Equally typically he would’ve traded any personal glory for a Bok win.

In retrospect it was an ignominious way to sign off what had been a stellar Test career that made Habana the most sought after property in world rugby at one stage.

Before that match Habana spoke passionately about his love of the game and of the Boks‚ but also of the pressure he was under at Toulon to play more rugby for the club that was paying him a princely wage.

“When I first moved to Toulon they knew that I still wanted to play for the Springboks‚ which I stipulated in my contract‚” Habana said on the eve of the Florence Test.

“Toulon are a little unhappy with me. Over the past four years I have missed about 32 games due to my Springbok commitments. I understand their frustration because I’m never involved in the first part of the season.”

Since then Habana has stayed loyal to Toulon as former Bok coach Allister Coetzee looked to locally-based players.

His scoring exploits‚ which included a brace in the semi-final against Argentina‚ was a huge factor in the Springboks’ march to the world title.

Habana played two more World Cups‚ and holds the record for most tries at the tournament with 15‚ which he shares with the late Jonah Lomu. A hattrick against the USA at the 2015 tournament equalled Lomu’s record.

His 67 Test tries are also a record by a tier one Test player‚ three more than Australia’s David Campese and only two short of the overall record of 69 held by Japan’s Daisuke Ohata.

“We have been privileged to have witnessed the career of Bryan Habana‚ who will undoubtedly be remembered as one of the great legends of Springbok rugby‚” said SA Rugby president Mark Alexander.

“During a career that spanned more than a decade and a half‚ he stood out as one of the most professional players ever to don the Springbok jersey‚ and over the years Bryan has been central to many of the most memorable occasions in the era of professional rugby.”

2015-Hattrick vs. USA at RWC takes him to 15 tournament tries. Also becomes leading tier one Test try-scorer with 66