Sharks sharpen their teeth for Bulls showdown at Loftus 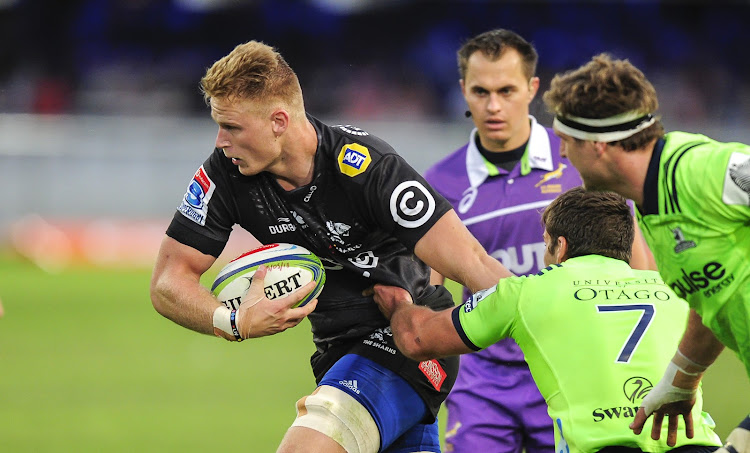 Daniel du Preez of the Cell C Sharks hands off Dillon Hunt of the Highlanders during the 2018 Super Rugby game between the Sharks and the Highlanders at Kings Park Stadium, Durban on 5 May 2018.
Image: Gerhard Duraan/BackpagePix

Sharks and Springbok loose-forward Daniel du Preez is one of the bully boys in his team's erratic forward pack and all eyes will be on him to provide the necessary grunt against the Bulls on Saturday.

The Sharks pack have picked and chosen their moments to rise to the occasion and one of the times they chose to rock up in body and not in mind‚ it was against the Bulls at home.

They were literally beaten black and blue by John Mitchell's side and revenge will be high up on the Sharks' menu.

Du Preez is aware that there was a physical deficit in last month's 40-10 home loss to the Bulls and feels his teammates are in better shape to ensure a repeat of the King's Park evisceration doesn't take place.

"The set-piece battle is going to be a big one and it will be a big decider in terms of which way the game goes‚” Du Preez said.

“If you win the physical battle‚ that's half the job done.

"It is something that we pride ourselves on and something we work hard on each week.

"The backs also have to do their part and if they also come to the party‚ it could be a real arm-wrestle.”

It presents an interesting and debilitating case of inconsistency from the Sharks‚ who have won two consecutive matches for the first time this season.

The Bulls have also dropped two consecutive game and in the rat-race that is the South African conference‚ every point counts.

There's also the significant matter of the Jaguares to keep at bay even though they have a bye this weekend.

The Bulls and the Sharks will be hosting this dangerous side later in the competition but Du Preez said winning in Pretoria won't be easy.

“It's going to be a huge battle because a South African derby is never easy and there'll be a lot of emotion.

"I think the boys will be remembering the Bulls game from a few weeks ago and I also think the Bulls will be hurting from the Stormers game. We're expecting a big battle‚” Du Preez said.

Two years after failing a transformation scorecard that nearly scuppered its Rugby World Cup 2023 bid‚ SA Rugby achieved its targets according to a ...
Sport
3 years ago

When the news finally arrived it was as good‚ as it was bad.
Sport
3 years ago

The Bulls have been boosted by the timely return of experienced Springboks prop Trevor Nyakane ahead of their must-win Super Rugby clash against the ...
Sport
3 years ago