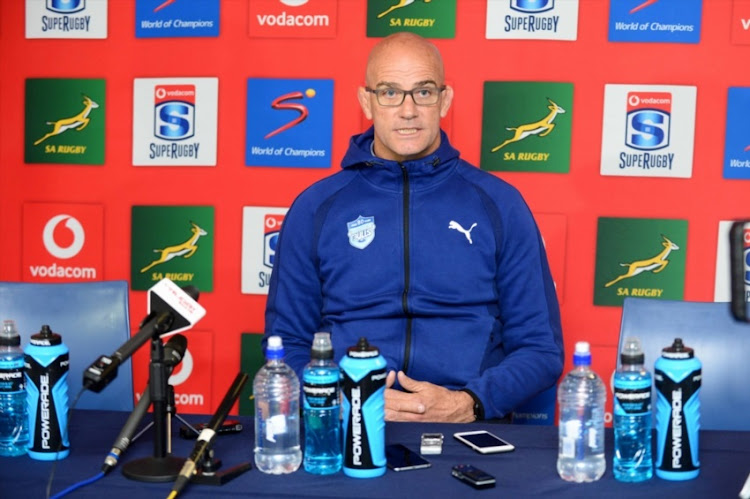 John Mitchell (Coach) during the Super Rugby match between Vodacom Bulls and Brumbies at Loftus Versfeld on May 26, 2018 in Pretoria, South Africa.
Image: Lee Warren/Gallo Images

Bulls coach John Mitchell has taken responsibility for the disappointing 38-28 loss to the Brumbies at Loftus on Saturday which has effectively ended their hopes of qualifying for the Super Rugby play-offs.

The Bulls occupy the bottom spot of the South African Conference and they are faced with a mountain to climb in their remaining round robin matches against the Sunwolves in Hong Kong‚ the Jaguares at home and Lions away after the Springboks’ June Tests against England.

After losing to the modest Brumbies‚ who arrived at Loftus on the back of five consecutive defeats‚ the Bulls have lost their second match on the trot following the 54-24 humbling by the on-form Jaguares last weekend.

“I will take responsibility and look at the reasons we failed as a group.

"At the end of the day‚ whenever there is a bad performance the person to look at is myself‚” he said as he surveyed the wreckage on Saturday.

“We are not making any excuses but we are thin upfront with injuries and we have a lot of players developing in Super Rugby.

"This is what we have to go through because there is no magic solution‚ we have lost Marco van Staden and Roelof Smit in his game against the Brumbies and the numbers are climbing in terms of injuries.”

Asked if the defeat has effectively dashed their play-offs chances‚ Mitchell admitted that the result has made the job of qualifying difficult.

“We certainly made things a lot more difficult for ourselves.

"It would have been nice to get the win against the Brumbies. We just have to restock‚ refuel and focus on each game at a time. That is the way it is‚” he said.

Mitchell also admitted that they lost the game in the last 15 minutes.

They conceded two tries from Tom Banks and Andy Speight while the Brumbies were a man down after Folau Faingaa saw red for unsporting behavior.

“We let it slip in the last 15 minutes and in a nutshell that is basically what made the difference‚" he said.

Brumbies coach Dan McKellar said they had the upper hand in the mauls and scrums and they got their spacing right in the second half.

“We know that John (Mitchell) has brought a different dimension to the Bulls because they play more with a lot more width‚" he said.

"They have good footballers at the back and they complement that with an excellent mauls and scrums.

"What we did well today was that we probably defended the mauls very well and we had the upper hand in scrum time.

"In the first 40 minutes we were under pressure at some stages but in the second half we managed to get our spacing right and cover the threats‚” said McKellar.