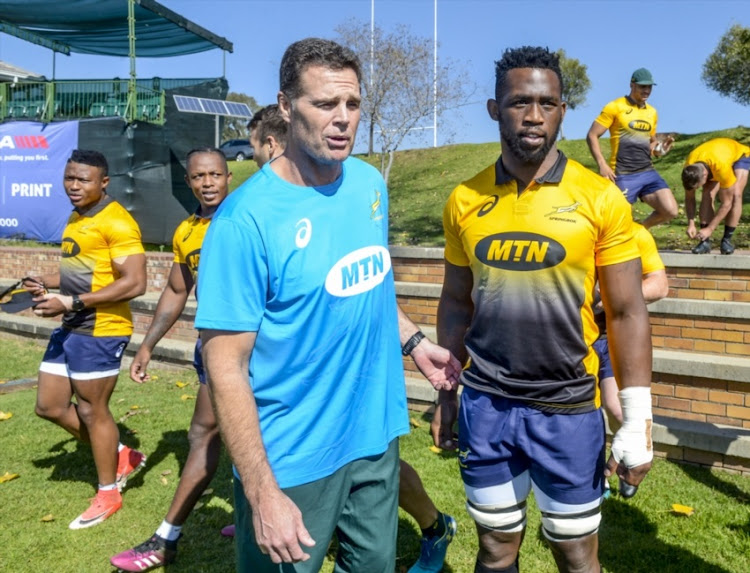 Captain Siya Kholisi with coach Rassie Erasmus of the Springboks during the Springbok training session at St Stithians College on May 28, 2018 in Johannesburg, South Africa.
Image: Sydney Seshibedi/Gallo Images

Springbok coach Rassie Erasmus says the recent transformation debates in South Africa played no role in his decision to award the team's captaincy to Siya Kolisi and it was the player's leaders qualities that won him the honour.

Kolisi will become the first black African to captain the Springboks when the South Africans host England in three Tests next month and Erasmus said on Monday after announcing the decision that he was impressed by the player's leadership ability.

Chilliboy Ralepelle captained a Springbok XV against a World XV at Leicester in England at the age of 20 years old under former coach Jake White in 2006 but it was not an official Test match.

“I know Siya is a good leader and I am excited about what he can offer us‚” said Erasmus.

“I coached him since he was 18 years old when he arrived at the Stormers from the Eastern Cape and through the academy until he played for the Stormers.

"I know him as a good rugby player

"This year he has gone through some tough times with form as captain of the Stormers but he is a great leader.

"I like him because he is humble‚ he is quiet and the way he is playing at the moment he is not flashy.

"With the breakdown work he is doing in attack‚ the carries and clean ups‚ he is playing almost like a blindside flanker.

“Before I was appointed‚ I have always understood all the transformation issues and that they are part of the way we are heading and I have bought into that.

"We are trying to fix all the wrong things that were done in the past.

"The recent things that happened did not have a bearing on this decision because my contract was signed long before.

"The players we have in this squad deserve to be here and I am not trying to fabricate things.”

Siya Kolisi's tries for the Springboks in 2017.

Erasmus did not give guarantees whether Kolisi will remain as leader of the side after the series against England because recent Bok captain Warren Whiteley and Eben Etzebeth still out injured.

“He (Kolisi) is most of the time available and it makes common sense that he is given this responsibility against England with Warren and Eben still out injured‚” he said.

The Bok coach announced a largely inexperienced squad on Monday to be led by Pieter-Steph du Toit against Wales at the Robert F Kennedy Stadium in Washington DC on Saturday.

Erasmus said he picked Du Toit to lead the side against Wales as he also has the potential to be a Springbok captain in future.

“I just think that for the first match against Wales‚ Pieter-Steph will be a good leader and he is someone who will be a good captain in future‚" Erasmus said.

"He will play for a few more years and the way we want to play against Wales he is the ideal candidate.”

Siya Kolisi will captain the Springboks when they host England in South Africa next month.
Sport
4 years ago

Coach Rassie Erasmus unequivocally ushered in a new Springbok era by naming 17 uncapped players in a 43-man squad for Tests against Wales and England ...
Sport
4 years ago